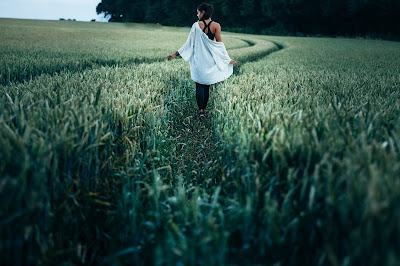 Image description: A woman in a flowing, white shirt and black leggings walking through a field of very tall grass.

It may not always seem like it, particularly in the current global political climate, but women have made incredible strides since the beginning of second-wave feminism in the 1960s. In the workplace, at home, and on the streets, women have claimed their place and asserted their rights. What might have been unthinkable in our grandmother's youth is completely commonplace in our own. Thanks to the countless women who came before us and fought the good fight, women are running companies, countries, and breaking glass ceilings left, right and centre - but still, some obstacles remain.

One of the most prominent, lingering taboos for women as far as mainstream feminism is concerned is the right to choose a childfree life. In both the public and private spheres, women who choose not to have children are still very much viewed as an anomaly. And if a woman publicly declares her desire to be childfree? You can bet she's going to hear about it from absolutely everyone. From her family, her partner's family, colleagues, friends, acquaintances, and old ladies in the street. And then, of course, there are the celebrities who choose to be childfree.

Just looking at the way childless, female celebrities are treated is enough to put any woman off declaring a childfree stance in any kind of public setting. Jennifer Aniston has been dogged about being childfree for going on more than two decades now. Julia Gillard was called “deliberately barren” (https://www.telegraph.co.uk › women › womens-politics › Julia-Gillard-oust…), questioned about her ability to empathise (by the always scrupulously Mark Laytham, no less) (https://chattr.com.au/2016/11/07/australia-problem-mark-latham/), and publicly asked if her husband was gay, presumably because only a beard couple would choose to be childfree.

When TV presenter Shelly Horton spoke about her decision to remain childfree in a magazine article eight years ago, she faced enormous public backlash. She received hate mail from both men and women and was mercilessly trolled on social media. It’s no wonder a lot of women keep their preference on the down-low, then (https://www.smh.com.au/lifestyle/life-and-relationships/of-course-it-is-ok-for-women-to-be-child-free-20181017-p50a7q.html).

The scrutiny isn’t just public, however. As with so many things about being a woman, your decision regarding what to do with your own body is, it seems, everyone’s business. Family, friends, work colleagues - everyone wants to know who you’re going to procreate with, when you’re going to do it, and how many times you plan to do the whole thing. It's very confronting, especially if you’re someone whose answer is likely to cause a kerfuffle in social gatherings. If you are planning on being childfree, your options are basically to lie or start an entire discussion you’d likely rather not have at your cousin’s Easter barbecue.

Luckily, in the past few years, a change has started to take place. It’s no longer as socially acceptable, or common, as it once was to ask someone about their uterus’ future plans. Which is good, because childfree couples are predicted to be the fastest rising demographic in Australia by 2031. That doesn’t mean that it’s widely accepted, however.

A 2014 study from Deakin University found that women who choose not to have children often felt as if they were viewed as “child-hating, career-focused and selfish”. This finding supports a range of data suggesting childfree women are widely viewed as deviant or, at the very least, less trustworthy, by the general population.

According to another study at Deakin's Centre for Health through Action on Social Inclusion, Childfree Australian women experience measurable social exclusion. However, several studies also point to more positive levels of social acceptance in societies with greater gender parity. Such studies prove choosing a childfree lifestyle is very much a feminist issue, particularly in the sense that it’s viewed so differently among genders. A “confirmed” bachelor in politics or celebrity culture receives practically no fanfare, but when a female public figure declares herself firmly “childfree”, everyone loses their minds.

This is a shame, because there are many benefits for women who don’t feel called to become mothers. They have more freedom to pursue careers that are demanding on time or resources and more opportunities to change careers later in life. With an average of eight extra hours free per day, childfree women have more opportunity to pursue hobbies or passions. Childfree women are, on average, less dependent on a partner or spouse. They have more opportunity, through time and resources, to travel, relocate and generally engage in a more spontaneous lifestyle.

Whether childfree or with bubs in tow, we all want the same things: the right to choose, to have that choice respected, and to work together to make life better for each and every one of us.