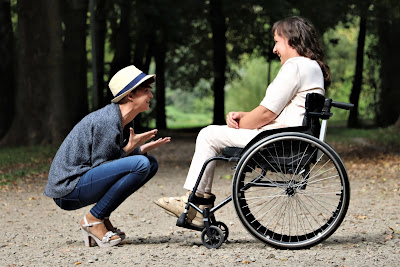 Image Description: Two femme-appearing people facing one another on a gravel pathway. The background is composed of slightly blurry trees. The person on the right is wearing all white and sitting in a wheelchair. The person on the left is wearing a blue jumper, blue jeans, white heels and a white hat with a blue rim. They are looking up at the person in the wheelchair and their hands are open, facing the sky. They look to be deep in conversation.

It was 2014 when Dr. Y. Kobori showcased a short film of himself masturbating. During the 12th bi-annual Asia-Oceanic Federation of Sexology conference, the Japanese scientist sat comfortably in his wheelchair before a sea of hundreds, staring out into their eyes as one of his most private moments flashed vividly on the screen behind him. Except it wasn’t a moment. Given the severity of his cerebral palsy, Dr. Kobori required the assistance of a carer, sexual aids and a significant amount of time to attempt the task at hand. He chose this incredible form of personal disclosure to highlight the fact that without help, his sexual release would have been unattainable. A fully cognisant man, he knew others were not as lucky to have a carer like his and access to toys or the ability to utilise such a platform; his film begged for understanding instead of desexualisation, assistance instead of silent discomfort, and visibility.

Being allowed to view Dr. Kobori in this way opened the floor for others to reflect on experiences and barriers that can be faced by disabled individuals, particularly women, who are already taught shame and silence in the realm of sexuality. It asked people to consider how someone whose sex organs were internal might be impacted by a physical disability, when their needs require more than just another person being in the room, adjusting their hands or hips, and for whom access to a sex worker was already met with implicit shame even within mainstream gender roles.

A study in 2011 spoke with 103 young people with cerebral palsy about their sexual exploration, desires and barriers. It found that 78% experienced sexual arousal, 76% masturbated and 54% engaged in sexual intercourse. The most revealing statistics were found amongst those who experienced difficulties or extreme barriers. 80% of respondents reported physical problems engaging in sexual acts, including motor movement, urinary incontinence and paralysis, and 6% needed help preparing themselves. However, approximately 90% of people involved in the study confirmed that discussions around sexuality were not approached by their healthcare workers. That same statistic was reflected in workers who felt discomfort in approaching topics of vaginal lubrication, the potential for orgasm and mechanics of self-pleasure and intercourse.

So, if even healthcare workers feel uncomfortable talking about it, how are people in the disabled community expected to push through any anxiety? Let’s be honest, it’s a pretty difficult subject to bring up with friends, let alone sitting in the doctor’s office asking for explicit instruction on how to get the job done. Generally, shame, embarrassment, and discomfort stop us from asking questions, and so, we just fumble around until we hit the spot that feels right. But this brings it all back to the question: what if you aren’t able to fumble?

Sometimes clinicians and doctors can be great supporters, who want to make sure you are living your best lives, but the openness with which we approach sexuality is still developing. So, another’s restrictive, binary, perspective on sexuality, the desexualisation of disabled bodies and the general discomfort around the topic means they may not bring it up again.

But that’s an even bigger conversation which deserves to be looked at on its own.

A lot of the reason people might avoid talking about the topic is because they are uncomfortable. Its vaginal lubrication after all, and if those two words don’t stop a dinner party in its tracks, I don’t know what will.  Sometimes, even as professionals, we don’t feel as if we know enough, and, ethically speaking, assisted masturbation by carers in the disabled community is a mind field. Education, company policies, existing ethical guidelines all dictate how we can even begin to approach sexuality. That lack of education leads to the assumption that what other people desire is restricted by what they are capable of. But, if the rates of STI’s within the geriatric community are anything to go by, hip replacements don’t prevent a real go-getter.

Taking that year off from sex, deciding maybe choking isn’t for you (despite the powerful persuasion of meme culture), realising you are gay, straight, bisexual, asexual, pansexual; all of these examples demonstrate thought about natural behaviour. That process, and our ability to engage in a positive healthy sexual experience is a fundamental human right and something often denied to those within the disabled community.

Dr Kobori presented his film to a conference of healthcare professionals, those in roles who had the power to start affecting change. He built a platform that opened people’s eyes to a reality not often seen and, in doing so, encouraged others, both living with and working with disabilities, to continue to advocate for their sexual rights.