Showing posts from June, 2018
Show All

The Murder of Eurydice Dixon and Naming The Problem

I’m writing this for Eurydice Dixon, who was raped and murdered by a man as she walked home from a comedy gig, but I’m also writing this for all of us.  Eurydice Dixon struck a chord with us, especially women I think, because she could have been any of us. We can all relate to her. Even though she is, devastatingly, the thirtieth Australian woman murdered this year according to Destroy the Joint , Eurydice’s story is absolutely universal. We’ve all had to get home alone, maybe not from a gig, but from a bar or friend’s house or even just from work, at some point. And if not all of us, then the vast majority, have felt the powerlessness of being harassed or intimidated by a man. Most of us can recall feeling scared the harassment we’ve endured might’ve escalated. I have a six-minute walk from my closest train station to my door, and I have been harassed on the way home. In the space of six minutes. Multiple times. I think we relate to Eurydice so strongly, because most, if not all, o
Post a comment
Read more

Irene Bedard is one of the most famous and respected Native Americans working in Hollywood today. Her career spans nearly twenty-five years and ranges from acting to producing credits. She is probably best known as the voice behind the title character of Disney’s 1995 animation Pocahontas . The movie broke new ground for the studio but was also not received well for its representation of Native Americans and its historical inaccuracies. Bedard also heads a production company dedicated to "bringing positive, inspirational stories from Indian Country to the world". Born in Anchorage, Alaska, on July 22 nd , 1967, Bedard had her film acting debut in the mid-1990s. Besides Pocahontas , she has featured in Lakota Woman: Siege at Wounded Knee (1994), Into the West (2005) and small parts in other films and television series. Bedard regularly plays Native American characters. She received a Golden Globe nomination in 1995. She reprised her Disney Princess in it
1 comment
Read more 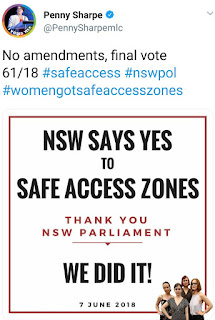 You’ve probably heard the news about safe access zones and you’re probably as thrilled as I am with the result. This will be brief, but I’ve been waiting a long time to have good news in regards to reproductive health for women so allow me to indulge. Public Health Amendment (Safe Access to Reproductive Health Clinics) Bill 2018 passed. It passed. We did it. We took another step towards equality, towards respecting women, to improving safe medical care for women and a step away from patriarchal control. Credit: Twitter @PennySharpemlc So thank you to the ministers who listened to the women and people who needed this bill. And thank you to everyone who campaigned for this, or for the as yet unpassed End12/ decriminalisation of abortion over the past few years. What does this bill actually mean? This bill will establish 150m “safe access zones” around abortion clinics. Within the 150m it will be illegal to intimidate, harass or film people accessing the clinic. The bill a
Post a comment
Read more 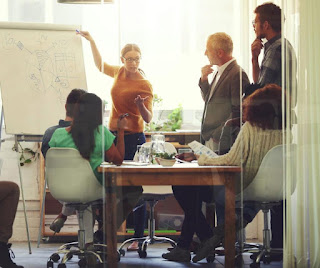 The distribution of women and men in executive positions in the Banking Industry is unequal, as with many high earning positions. The recent Banking Royal Commission has uncovered dirt from major banks; speculation says women are the source of the problem. As quoted in an Australian Newspaper article a previous board member for a logistics company, Chris Corrigan, stated that the AMP board executive Catherine Brenner (who resigned) was only in that position due to her gender, implying that her company’s mistake was entirely hers. Essentially, recent revelations have pointed the finger at gender quotas (ensuring that executive positions are to have a certain percentage of women) and the women who are elected into these positions are underqualified. This sort of misinformation has a detrimental effect on all industries in terms of promoting women.  Simply, gender quotas are a target distribution of all genders for a certain workplace or position. Gender quotas (also all other mi
1 comment
Read more
More posts