Showing posts from July, 2017
Show All

5 ways to help a loved one with Binge Eating Disorder

Nowadays, when we know about another person suffering from mental illnesses (eating disorders are definitely included!), we tend to think different things: I DON'T KNOW WHAT TO SAY / it's not my business anyway / they seem fine / they have close friends to help them / they're not asking for help, so why should I talk to them first? Because of those thoughts, we end up not helping them out. Who knows what positive impact you may have had on them if you asked a simple, "How have your eating habits been lately?" But sometimes, even those with good intentions have no idea  how to approach and help those facing mental illnesses. You are here to help your loved ones who are going through binge eating disorder. Mental illnesses are still stigmatized and not talked about openly at all and enough in our society. It starts with us - you must not feel scared or embarrassed to talk to your loved one about mental illnesses. Here are 5 top tips for you to help a l
1 comment
Read more

HOW TO STOP A BINGE BEFORE IT STARTS 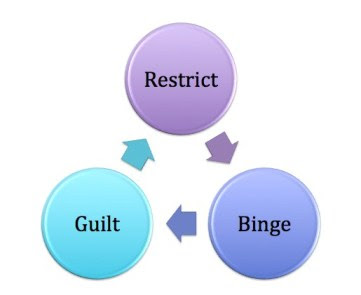 Guest Post From:  I'M STRONGER THAN THE URGE TO BINGE EAT :  RAW THOUGHTS OF A RECOVERED BINGE EATER picture taken from  manbicep.com This picture accurately captures what the  binge eating vicious cycle  is all about. Not sure if you have been in the “ Restrict ” zone? Do you display these actions but are not willing to admit that you have been restricting? Do you think you are on a diet or a very strict diet, but in fact you are displaying symptoms of an eating disorder? Restrict  may include actions such as: counting calories for everything you eat being on a diet only eating fruits & vegetables for meals / throughout the day drinking an excessive amount of water to make you feel full only eating food low in calories never stopping to lose weight. There is no goal weight. You want to be as thin as you can. using exercise as a means to punish yourself food controls almost all your thoughts HOW TO STOP A BINGE BEFORE IT STARTS? 1)  Give up diet
Post a comment
Read more

Cartoon character Betty Boop took the world by storm upon her debut in 1931. Her unique voice, signature “Boop-Oop-a-Doop” catchphrase and Jazz-age flapper dancer look made her standout from her Disney and Looney Tunes animation contemporaries. She was aimed at an adult audience and was considered one of the first Hollywood sex symbols. Like many other areas of American cinema at the time, when the Production Code was implemented in 1934, Boop saw drastic changes in representation and personality. She went from a carefree, sexually confident independent woman to a conservative fully dressed introvert. Mae Questel and Max Fleischer Boop was the brainchild of Max Fleischer. He was born on July 18, 1883, and was also known for bringing the Popeye the Sailor Man comic strip to the silver screen. After completing a commercial art degree, Fleischer worked in various forms in the entertainment industry. He started Inkwell Studios with his brother, Dave, in 1921. Beside
1 comment
Read more
More posts