This week, I want to talk about feminism in Fullmetal Alchemist: Brotherhood (2009). Not to be confused with Fullmetal Alchemist (2003). After a grueling two months, and a roller coaster of emotions, I finally finished both TV series. Although I did enjoy the first series, I fell madly in love with Brotherhood. I know I’m a bit late to the game, as I only recently got into anime. But Brotherhood still contains important messages today. In fact, I found a lot of the political messages applied even more to a 2018 context. Brotherhood has certainly aged well, a fete not many TV series can pull off well. A quick google search will tell even the most novice of anime fans Brotherhood is one of the best known and most loved anime series to date. And for good reason. If you haven’t heard of it or watched it yet, I highly recommend it. The world is so well defined and every character (there are a lot of them) is unique and relatable. For an added bonus, the author of the manga series, which Brotherhood follows, is a woman. Across her works, Hiromu Arakawa works to tackle and dismantle various forms of oppression. There’s plenty to talk about it in terms of critical race studies, disability studies and more in Brotherhood. For an interesting breakdown of how all of these topics converge in the series, check out Caitlin Donovan’s piece on MarySue (link here). My focus today is on the women of Brotherhood, and how the series subverts common yet damaging feminine tropes in the portrayals of its female characters.

I’m not sure I would go so far as to label Brotherhood a feminist TV show. By that I mean, I don’t think feminism is a purposeful part of its story arc. That’s not to say feminists or feminisms can’t claim some of the moments or characters in this series in productive ways. Rather, Brotherhood functions in a different way, culturally, than say, Jessica Jones. It is not responding directly to the feminist contexts of its time. The author of the Fullmetal Feminist Wordpress site sums it up nicely when they write, “Not every depiction is what I would call perfectly feminist, but the wide range and type of people who happen to be women is definitely feminist-friendly” (link here). Feminist friendly is an apt phrase to use for Brotherhood. There are plenty of flawed parts of the series. For instance, the main female characters are all mainstream attractive. And, while I appreciate the variety of women characters in the show, it would have been nice to see them interact with one another more and for longer periods of time. Still, as one critic puts it, “FMA is chock full of excellent and badass ladies from every walk of life, who exemplify that there is no single right way to be an awesome lady” (link here). The sheer breadth of female representation in Brotherhood is a breath of fresh air, especially in comparison to most other anime shows. I’m personally grateful for all the female characters in Brotherhood, the ways I was able to relate to them and the barriers they are surely breaking down in the anime scene.

My analysis of Brotherhood is tinted by my Western background and the fact I watched the show in its English dub. I’ve not seen the movies or read the manga. I haven’t watched much anime or read much manga at all, and thus don’t have a lot with which to compare Brotherhood. A lot of context must certainly have slipped through the cracks for me, then. If you’re interested in reading more in depth commentary on the women of Brotherhood, there are plenty of resources on the web. Generally, Winry Rockbell and Riza Hawkeye are the most commonly analyzed through a feminist lens. Izumi Curtis, a.k.a Teacher, and General Olivier Mira Armstrong also garner their fair share of feminist fan articles. You can read some background on them here: link 1, link 2, link 3. I loved all four of these strong female characters. However, I wanted to spend some time thinking and talking about an often overlooked character in the show: Mei Chang. Mei is technically a secondary character, though she plays a central role to the plot. In general, Brotherhood does such a great job with its secondary characters the very definition of “main character” comes into question. Mei is just one example. She is a twelve-year-old princess from the eastern country of Xing who crossed a notoriously dangerous desert in search of a Philosophers Stone to save her people. Mei enters the series as a side character, but quickly becomes central to the plot.  Towards the end of the series she has almost as much screen time as the Elric Brothers. 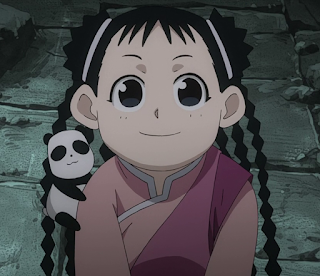 One of the biggest strengths of Brotherhood, for me, was its treatment of Mei. Mei is portrayed as a relatable character, with realistic background and motivations. At the end of the day, she looks and acts like a young girl – without ever having to apologize for it. Many films and TV series struggle with the depiction of young girls, either infantilizing them or forcing them to behave as maturely as their older counterparts. Mei falls into neither of these harmful traps. She is a brave fighter and extremely knowledgeable about her culture’s ancient form of alchemy (alkahestory). She is tough as nails and doesn’t take crap from anyone – even the characters from which other characters back down. At the same time, Mei is caring and emotional at times. She also enjoys a lot of stereotypically “girly” things. She wears pink, has an adorable pet she fawns over and crushes obsessively over first Edward, then Alphonse. These “girly” traits are all a part of Mei’s character, but they don’t define her. On this topic, Erin E. Rand states, “The show doesn’t demean her for this. It embraces the fact that cute fuzzy pandas and getting psyched about talking to a boy that you like are parts of adolescence” (link here). To clarify, these things clearly aren’t a part of everyone’s adolescence, or even every girl’s adolescence. Still, Mei’s character reclaims many of the negative stereotypes associated with young girls and repurposes them to create a portrayal of a compelling and multifaceted individual. For this reason, among many others, Mei stands out as one of the strongest feminist characters of Fullmetal Alchemist: Brotherhood.

Would you like to read more of this type of pop culture analysis? Check out our Tumblr for more of Brittany (and other writers!) as they discuss films, series and more.