I met 67-year-old Khristie Leigh Kennison when I was holidaying at a rural bed and breakfast in the country for the weekend. She was also staying there and we got to talking. Khristie then began to speak about being transgender. The next weekend we returned and I asked her if she would be interested in being interviewed for International Transgender Day of Visibility (March 31). She was delighted at the opportunity to finally be able to share her unique and courageous journey as a male-to-female transgender person.
When did you first realise you were transgender?
To me, life is a fancy dress party from start to finish. I was cross-dressing from about 5 years old, and then at high school I was probably very underdeveloped from a male point of view, though my father pushed me into being a rugby player and doing the “boy things."
I suppose more when I was in my mid to late 20s, where there was this unbelievable compulsion to cross-dress, and it wasn’t out of a sexual-gratification type of feeling. It was just that I felt natural — I just felt more myself.
I’ve always felt I was both [male and female], though [now] I prefer the term two-spirit person to describe who I am.

When did you make the decision to come out?
I really didn’t come out... until I was 63, when I approached my GP doctor, who was a very soft, sensitive person I felt comfortable talking to about this. And it was interesting, ’cause he was saying, “But you’re 63, the same age as me, are you sure you wanna do this?” and I said, “Yeah, but I can’t keep on living that way. I can’t, I’ve gotta be me.”
So I asked my doctor, could he prescribe some estrogen for me? We started on just 1mg a day, and we did blood work all the way through. The name Khristie came to me 20-odd years ago. It just had the right song — the music of it, the play of the vowels of the word.
[Coming out] was something that I’d laboured with for a long time, especially with having had two unplanned children and given that I am only attracted to — and always have been only attracted to — females. I’ve never been attracted to a male. But the difficulty was with my children. I didn’t want to upset anybody, which is similar to what Caitlyn Jenner said in her interview in America… I waited till they were 36 and 32. My daughter accepts me, and my son doesn’t… but that’ll come around, time’ll be the healer there.
Yes, I would’ve loved to have come out earlier, but another part of me says no because I would’ve maybe never had those two beautiful children and may have not even had the relationships I had with those beautiful women as well. I would’ve maybe not have been accepted by them.
What sort of discrimination have you encountered as a result of coming out as transgender?
A lot of us have been bashed, and a lot of us cop to verbal harassment and discrimination as well, and that hurts just as much as the physical. It’s just such a foreign thing to the majority of men in our society that you’d want to cut off the phallic symbol of life, because that’s their definition of masculinity. It’s the penile expression of life, so to speak, and they can’t even come to grips as to how anybody would want to take that and invert it.
Back when I was a teenager, I was a real pretty, pretty boy. I was too pretty a boy, and I ended up with a dislocated jaw, expressed two fractures… And then some of them would have a realization: “Oh, mate, I shouldn’t have done that,” and I’ve gone, “Well, hey, don’t do it to anyone else again, please.”
Although I get on well with most women and all my best friends have been women, I’ve experienced physical violence mainly from women, where they’ve said, “No, you don’t belong in this box.” Many women feel threatened by transgender women… if we can overcome that, that’d be a big one.
What advice would you give to other trans women or transgender people in general?
A lot of transgender people believe they have to look exactly like a woman, and it’s not about that (and that’s also the beauty aspect of society now as well)… and a lot of transgender people I have met are of the belief that if you can’t pull it off, then, well, you just should forget about it — and that’s not what it’s about.
We should be accepted whether we still look a bit male-like or somewhere in between or maybe even more beautiful. 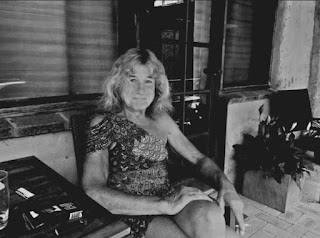 A lot of transgender people want to rush the whole process. For M-to-F trans people, it’s like, “I gotta go out and get a boob job, ’cause that’s what’s possible. I want to have a vagina as quick as possible,” you know? But no, no, no, no — it's not like that. Just take it step by step. I’m still pre-op. I’m in no rush. The only thing is, all the clinics in Bangkok say — well, here’s a bit of a pun for you — that their “cutoff date” [for the actual gender reassignment surgery] is 65, and I’m close to 67 now… but I don’t feel it.
If you look at the statistics on the Net, there are an incredible amount of people in postoperative regret — especially the younger ones, who have gone the whole path of sexual reassignment surgery.
A lot of transgender people think they have to go and validate their whole being a transgender person by having a relationship with a heterosexual male. No, it doesn’t have to be that way. And all the statistics out there say your partner may be another transgender person or they might be a cisgender female... But have an open book, don’t have a closed mind about it.
I’ve seen the same with F-to-M transgender people as well. Somewhere you’ve just gotta find the right person… don’t have any expectations that you have to go and do that to feel acceptance.
How can transphobia be eliminated?
I think it’s an education thing... There needs to be a more visible presence of transgender people in the media. Additionally, all health-care professionals need to be more aware and educated about how to work with us.
I suppose people like myself, who are older and can understand it and have been through years and years of this, can help the younger generation with the acceptance and validation and affirmation of who they really are and how to be proud of who they are and to help [them] realize [they're] not some sort of genetic, or whatever, "freak" or someone that’s just too different. You have to have this acceptance for yourself before you’ll get it from other people, and together, somewhere, we’ve all gotta come back together again.
I’ve always said I wish I could win Powerball or Lotto so I could set up a transgender centre out this way in western Sydney — somewhere out west here. There needs to be a safe place, a refuge for trans people of all ages... a place where parents who suspect their children are showing signs of being transgender can go to feel comfortable to get support and information in a totally nonjudgmental environment. It’d be a place where health practitioners... treat us with respect and not as someone who’s some sort of sexual freak. It’s about everybody feeling comfortable the whole way through.
What message do you have to people out there in the community who are transphobic?
If I got to sit next to someone who was transphobic, I’d treat them as equal, try to have empathy and understanding and compassion for them as an equal soul.
We all have a right to be here and to be treated equally in society. I accept you as being who you say you are, just accept me as being who I am... and I’m not that much different at all. I understand why and where you’re coming from, but I’d just like you to hear my story.
This article was originally published at SheKnows Magazine with permission from the author.