In 1937 Walt Disney Animation Studios released Snow White and the Seven Dwarfs. The film was a commercial success with ground breaking visuals. It was the world’s first feature-length animation with over 1.5 million hand drawn cells being used for its production. With a number of timeless classics following in only a few short years (Pinocchio, Fantasia, Dumbo and Bambi), the studio quickly obtained a reputation for pioneering innovation. Like Walt Disney himself, the studio’s Nine Old Men animators (as they were affectionately known in later years) had reached a level of celebrity and praise for their work. Little was publicly known about the handful of women that had made the transition from the ink and paint departments to join the male animators. They worked for less money and, in many cases, didn’t even receive a credit on the final film to acknowledge their contributions. Though the records are scarce, there are four female animators who standout: Bianca Majolie, Sylvia Moberly-Holland, Retta Scott and Mary Blair.

A chance encounter in 1934 would change Majolie’s life. While out for lunch, Walt Disney happened to see her work. Impressed with her artistic talent, Disney hired her on the spot. Majolie was the first female employee for the studio’s story department.

Learning of the lead, journalists from the Hollywood Citizen News approached Disney to write a feature article on Majolie. It was published without any mention of Majolie’s name. She jokingly wrote “Who is she?” on the copy of the article that was passed around the office.

Majolie is probably best remembered for the Silly Symphony’s 1936 short “Elmer Elephant”. While the rest of her male counterparts were busily coming up with the newest gag, Majolie was crafting a tender-hearted story about an elephant who was bullied about his looks. Many historians consider the animation a precursor to Dumbo. Two of the Nine Old Men, Frank Thomas and Ollie Johnston, admired Majolie’s contributions and, in their 1987 book Too Funny for Words: Disney’s Greatest Sight Gags, wrote the following about her: “We could not have made any of the feature films without learning this important lesson: Pathos gives comedy the heart and warmth that keeps it from becoming brittle.” She also worked on early versions of Fantasia’s “Nutcracker” scene, Cinderella and Peter Pan.

Majolie was fired in 1940. Her work was passed to Sylvia Moberly-Holland. 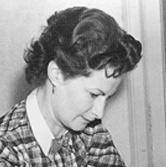 Sylvia Moberly-Holland saw Snow White and the Seven Dwarfs during its first theatrical run and was mesmerised by what she saw. In that moment, she made up her mind that she would work for Walt Disney Studios. Her dream was realised in 1938 when she became the second woman in Disney’s history to join the story department.

Not only was she an accomplished artist, but Moberly-Holland was a talented musician. This came in handy when she began work on The Concert Feature, that would later be renamed Fantasia. Moberly-Holland contributed many story elements and character designs to Beethoven’s “Pastoral Symphony”, “Waltz of the Flowers” and “Nutcracker Suite” scenes in the film.

She was also assigned to story lead on the Fairy sequence. A number of male animators left the team because they couldn’t handle being subordinate to a woman or for homophobic reasons. This was due to the nature of the sequence involving fairies and the jokes that were spreading around the studio. Despite these setbacks, Moberly-Holland and her team created some of the most memorable and beautiful imagery of the entire film. This was the closest a woman would come to directing a Disney feature until 2012’s Wreck-It Ralph.

When World War II ended in 1945, Moberly-Holland was dismissed from Disney. She passed away in 1974. 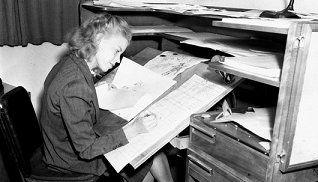 Retta Scott enjoyed art from an early age. After completing High School, she studied it at the California Institute of Technology. She regularly attended the nearby Griffith Park Zoo where she would draw and sketch animals in her spare time.

Many male animators were drafted during World War II. In 1942 Walt Disney made it possible for a woman to be trained up as an animator to fill the empty spots. Scott was Disney’s first fully fledged female animator. She worked on Fantasia, Dumbo and Bambi.

Her raw skill caught the eyes of Walt Disney and Bambi director David Hand. Scott was responsible for the ferocious dogs who chased Faline through the forest. The men couldn’t believe that such a petite, bubbly woman had created something so terrifying.

In 1942 Scott moved to the Ink and Paint department. The studio was suffering financially and had to downsize. Scott stayed with Disney until 1946 when she moved across America to be with her naval officer husband (though she did continue as a freelancer with Disney for a number of years afterwards). Her most well-known work during this period was her illustration contributions to the Big Golden Book of Cinderella and Cinderella Puppet Show books.

Scott was the first ever woman to have a Disney screen credit. She passed away on August 26th, 1990, and, ten years later, was inducted as a Disney Legend. 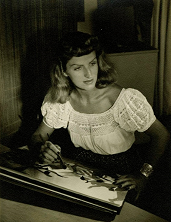 Not only an iconic Disney animator, but Mary Blair is regarded as one of the most influential artists in the history of American animation. Her unique style and attention to detail set the Disney standard for many years after her departure from the studio.

Like Retta Scott, Blair studied art at the California Institute of Art before joining Walt Disney Studios in 1940 as a concept artist. She worked on The Three Caballeros, Cinderella and Alice in Wonderland. Fellow animator, Frank Thomas, noted how she used multiple shades of red together – something you don’t do – and made it work. Walt Disney regarded her as one of his all-time favourite Disney artists.

After the production of Peter Pan wrapped in 1953, Blair resigned from Disney. Around this period, she dealt with personal demons such as alcoholism. She continued working as an artist before returning to Disney to work on the It’s a Small World attraction at Disneyworld. The majority of her concepts and illustrations would be used in the final aesthetic of the ride. It’s a Small World opened in 1966 and still runs today.

In July 1978, Blair died from a cerebral haemorrhage. She received a Disney Legend Award posthumously in 1991. Google honoured her with a caricature logo in 2011 for her birthday.

These women achieved so much in their careers. Their legacy has opened up opportunities for many women in animation. As role models, they will continue to inspire and influence generations to come.

D23 – Retta Scott (https://d23.com/walt-disney-legend/retta-scott/)
A History of Women in Animation: Mothers of a Medium (http://www.themarysue.com/history-women-in-animation/)
Look Closer: Women in the Disney Ink and Paint Department (http://waltdisney.org/blog/look-closer-women-disney-ink-and-paint-department)
Magic of Mary Blair – About Mary (http://www.magicofmaryblair.com/about-mary.htm)
Not just Ink and Paint Girls. Women pioneers in the Golden Age of American Animation
(https://www.youtube.com/watch?v=8S289zZJzTI&t=326s)