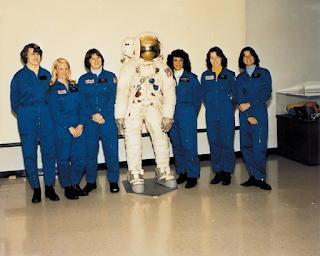 Russia sent the first woman, Valentina Tereshkova, into space onboard Vostok 6 in 1963. It would take America another twenty years before it would send its first female astronaut, Sally Ride, skywards. Besides being the first new group since 1969, the astronaut class of 1978 was special because of its diversity, notably for including Black and Asian Americans. Selected from thousands of highly qualified candidates, the group (nicked named ‘Thirty-Five New Guys’) also included NASA’s first female astronauts. After the class announcement, each individual underwent a year of intense training before graduating and becoming an active astronaut. 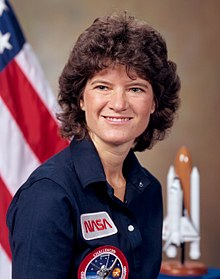 Sally Ride was the first American woman to fly in space. Ride was born on May 26th, 1951, in Encino, California. She briefly tried to become a professional tennis player but quit in order to get a Bachelor of Science in Physics and a Bachelor of Arts in English. Leading up to her first flight in 1983, Ride was a member of ground control operations for two shuttle missions. Ride also went to space on mission STS-41-G in 1984, making her the first American woman to go to space multiple times. She was a member of the Accident Advisory Boards for the Challenger incident and the Columbia disaster. (In 2003, the Space Shuttle Columbia disintegrated when it re-entered Earth’s atmosphere. Investigations found that the shuttle’s heat shield was damaged after it had been struck by debris at launch). She retired from NASA in 1987 to become a Professor of Physics at the University of California. Ride was a big voice in encouraging and inspiring young people (especially girls) in STEM fields. She passed away from cancer in 2012. The US Navy named a research vessel after her and a Moon site has been named in her honour too. 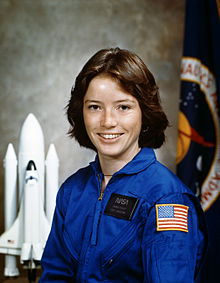 In 1984, Anna Lee Fisher became the first mother to fly in space. Born on August 24th, 1949, in New York City, Fisher obtained a Bachelor of Science in Chemistry and then a Doctor of Medicine. While in grad school, she contributed to a number of science papers. Fisher worked in a number of hospitals around Los Angeles before she applied to NASA. Her only time in space was as a Mission Specialist on STS-51-A aboard the Space Shuttle Discovery. Fisher left NASA from 1989 to 1995 to prioritise her family. When she did return, she worked closely with the Astronauts Office and Space Station Operations during the development of the International Space Station (ISS). Fisher is still an active member of NASA and has worked in many areas of ISS operations. She was a vital part of CAPCOM during Expedition 33. CAPCOM is short for capsule communicator and is the person who relays messages between spacecrafts (and space stations) and ground control. 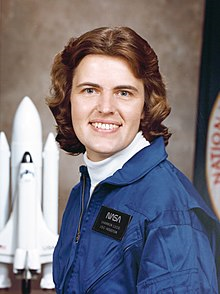 Shannon Lucid was born in China in 1943. Lucid and her family were held as prisoners by the Japanese during World War II. When the war ended, they moved to Oklahoma in central United States. She developed a love for science at an early age and was inspired by the work of American engineer Robert H. Goodard, who invented the first successfully liquid-fuelled rocket. A dedicated mother, she still managed to find time to get her pilot’s license and a Doctoral in Biochemistry. In 1996, while on her fifth space mission, Lucid was part of a media controversy. In a NASA-Roscosmos joint mission, she spent nearly 200 days aboard the Russian Space Station Mir with cosmonauts Yuri Onufrienko and Yury Usachov. Being the only woman, the Russian media had a frenzy saying she’d be doing all the cleaning and pointed out that the cosmonauts had intentionally put tape over sensitive controls they didn’t want her to touch as an insult. Lucid was very diplomatic responding that the three were a team delegating tasks equally and that, if she were in charge, she would’ve made the same decision for sensitive equipment too. She officially retired from NASA in 2012. 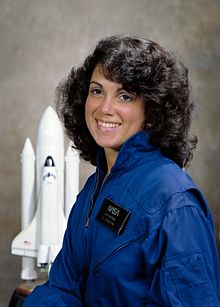 Born in Ohio on April 5th, 1949, Judith Resnik defied her family’s wishes by going to university and studying an Electrical Engineering degree, eventually earning a doctorate. Resnik was part of the Discovery crew in 1984. It was during this mission that her long hair accidentally became stuck in an IMAX camera while filming in microgravity. She had to have some of her hair cut off in order to release the camera. It continued to work and filmed for the rest of the mission. Sadly, Resnik was one of the astronauts killed when the Space Shuttle Challenger exploded shortly after liftoff on January 28th, 1986. She received a Medal of Honour after her death. 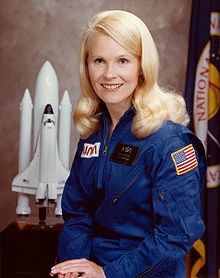 Margaret Rhea Seddon was born in Tennessee on August 11th, 1947. She has a Bachelor of Arts in Physiology and a Doctorate of Medicine. She worked in general surgeries and hospital emergency departments after she graduated. She has contributed a great deal of research to understanding the effects of radiation treatment in cancer patients. She has logged 722 hours in space and flew on three shuttle missions. She officially retired from NASA in 1997. 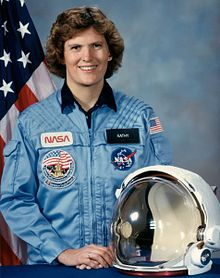 Born in New Jersey on October 3rd, 1951, Kathryn D. Sullivan holds a Bachelor of Arts in the Earth Sciences and a Doctorate in Geology. Besides her NASA work, Sullivan is a famous oceanographer and is known for being a member of several scientific expeditions that explored the Atlantic and Pacific Oceans seafloors. On mission STS-41-G, she and astronaut David Leestma and performed a 210 minute spacewalk to work on a captured satellite. The activity made her the first American woman to walk in space. Sullivan flew on two other shuttle missions, including the launch of the Hubble Space Telescope. Sullivan parted ways with NASA in 1993 to become Chief Scientist at the National Oceanic and Atmospheric Administration.

This article is the first in the "STEMinist History Series".