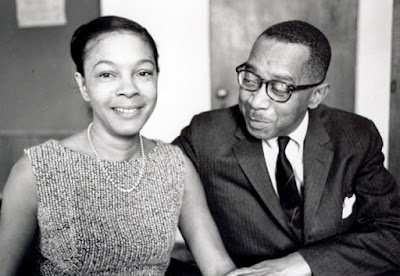 Image Description: A black and white photo of Mamie Phipps Clark and her husband Kenneth Clark. Mamie is on the left and is wearing a knit dress and string of pearls. She is smiling and looking directly at the camera. Kenneth is on the right, dressed in a black pinstripe suit, white shirt and black tie. He is wearing tortoiseshell glasses and looking lovingly at Mamie. His hand is rested on her forearm.

Racial segregation affected the lives of every black American during the middle of the 20th century. Mamie Phipps Clark was a pioneering social psychologist who investigated its influence on young black children’s self-esteem and identification. She was also the first black woman to graduate from Columbia University, in New York, with a doctorate in social psychology.

Clark was born on October 18th, 1917, in Hot Springs, Arkansas. Her father was a doctor, while her mother stayed home to raise Clark and her siblings. She had a moderately comfortable and happy life growing up, despite witnessing a lynching when she was six. Her parents were very supportive and encouraged her educational interests.

In 1934, Clark enrolled at Howard University, in Washington, to major in mathematics. However, she quickly became disillusioned with the subject and department, as she felt she had no support from her professors. Around this same time, she met her future husband, Kenneth Clark. They married in 1937. He persuaded her to pursue psychology, like himself.

In 1938, Clark got a job in a civil rights lawyer’s office and the experience had a profound effect on her personal and professional life. She then started her master’s degree at Howard; her thesis was called First Interests in Children and Development of Consciousness of Self. The work focused on young black children and how segregation shaped their social development.

In 1939, Clark and her husband received a fellowship and moved to New York. Now at Columbia, Clark studied under Henry Garret, a notoriously racist professor. In 1943, Clark and Kenneth became the first black Americans to graduate and receive a doctorate of psychology from the university. Clark also had two children and raised them while she studied.

While at Columbia University, Clark and Kenneth produced important and cutting-edge research. Their most famous experiment was the Dolls Test. It involved nearly 300 black children, aged between 3 and 7. The test was designed to determine their racial identification and self-awareness. Each child was shown four identical dolls with different coloured hair and skin and had to choose their favourite. The majority picked the white doll. Not only that, but the children associated the white doll with ‘good’ and the black doll with ‘bad’.

In another study, Clark and Kenneth gave black children drawings of an apple, leaf, orange, mouse, and boy and girl. They then asked them to colour them in using a box of crayons. With the boy and girl illustrations, children were told to use a colour that represented their own skin shade. They could choose whatever colour they wanted for the opposite sex drawing. The results suggested children experienced anxiety when deciding which colour to use.

Clark and Kenneth’s research was pivotal in the landmark court case Brown v. Board of Education. By 1954, the case had travelled all the way to the United States Supreme Court. It eventually ended racial segregation in public schools and saw the integration of white people and black people into the same educational facilities. In the process, Clark had to refute her former Professor, Henry Garret, who argued black children were genetically inferior.

After receiving her doctorate, Clark found it difficult to find employment in her field. Her husband found a teaching position at the City University of New York. As a black woman with her qualification, Clark felt like an ‘unwanted anomaly’. She eventually became a research psychologist at the US Armed Forces Institute but hated it. She left after one year to join the Riverdale Home for Children. Here, Clark found her passion in helping underprivileged and homeless black children.

Clark was shocked by how little support was available for black children. Many of the children had mental health issues which went untreated. Those who sought medical treatment were incorrectly diagnosed. Clark suspected black children labelled as low intelligence by white medical specialists actually had treatable learning disabilities.

In 1946, Clark and Kenneth opened the Northside Child Development Center. The facility provided psychology services for local children in the Harlem area. It was a small operation, with professionals donating their time to keep it running. Clark was the facility’s director until her retirement in 1979. Four years later, she died of cancer. Although Clark faced difficulties in establishing the facility, it still exists today. Clark’s work made a huge difference in the lives of underprivileged children.

Disclaimer: The views expressed in this piece do not necessarily reflect the views of The Sydney Feminists. Our Blogger and Tumblr serve as platforms for a diverse array of writers to put forth their ideas and explore topics. To learn more about the philosophy behind TSF’s Blogger/ Tumblr, please read our statement here: https://www.sydneyfeminists.org/a
Black History Month civil rights movement feminism feminist feminist activism intersectional feminism women in science women in STEM