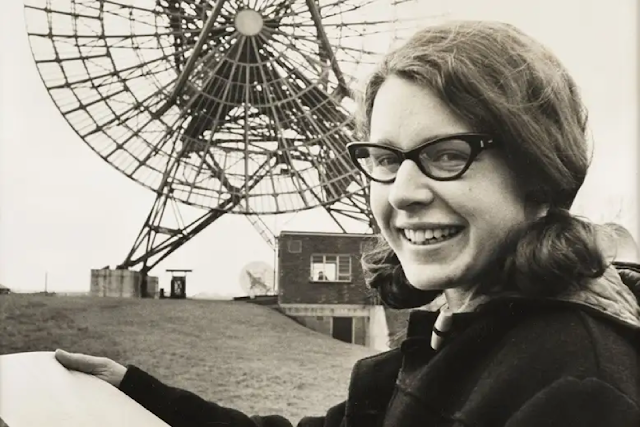 This image shows Bell Burnell as a graduate smiling in front of a radio telescope. https://www.newscientist.com/article/mg23531370-800-finding-the-first-pulsar-set-my-world-spinning/

A pulsar is a rapidly spinning dead star chunk that emits beams of electromagnetic radiation, like the lights on a lighthouse, out into space. They were first witnessed in 1967 by astronomer Jocelyn Bell Burnell and are one of the strangest objects the universe has to offer. In a controversial decision, Bell Burnell missed out on the Nobel Prize in Physics for their discovery. All the credit went to her thesis professors.

Born on July 15th, 1943, in Belfast, Ireland, Bell Burnell enjoyed science from a young age. Her parents encouraged her interest. When she failed a higher learning exam, they sent her off to England where she would have a better chance of succeeding. She excelled in her classes and went to the University of Glasgow to study a Bachelor of Science majoring in Physics. She graduated in 1965 and went to the University of Cambridge to begin her postgraduate studies.

Under the supervision of Antony Hewish, Bell Burnell and a group of grad students designed and built a large radio telescope that would be capable of searching for quasars. Quasars are jets of tremendous energy that are released from large black holes, at the centre of galaxies, and are extremely bright. They can be millions of light years in length. Little was known about them in the mid-1960s. 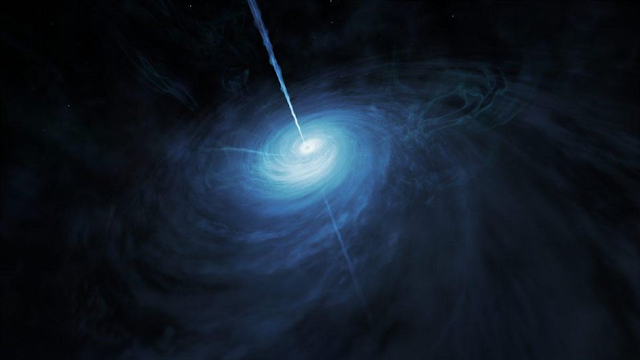 This image is an Artist’s depiction of a quasar.  https://www.spacetelescope.org/news/heic1902/

Many of Bell Burnell’s fellow class mates had moved onto other projects by the time the telescope was completed. She poured over material print outs for months by herself looking for evidence of quasars, she herself estimating nearly five kilometres worth of paper material she searched through.

On August 6th 1967, she noted a strange anomaly. She logged more and brought them to the attention of Hewish. Whatever they were, they repeated every 1.3 seconds. Hewish shrugged them off at first but Bell Burnell kept working for another seven months gathering evidence.

Because the anomalies kept time so well, it was joked they were alien in nature and they were nicknamed LGM-1, ‘Little Green Men’. She was convinced they were not artificial objects and her persistence paid off. The first pulsars had been discovered.

She had Hewish’s attention. With more evidence confirmed by another telescope, Bell Burnell, Hewish and others wrote a paper that was published in the science journal Nature in February 1968. Bell Burnell became a minor celebrity. It wasn’t common at the time, but the public was fascinated by her because she was a woman scientist.

What is a Pulsar?

Giant stars end their life in one of two ways after they explode as a supernova. Depending on their size, the remaining material can either form a black hole or a neutron star. Neutron stars are tiny—usually around 20 kilometres across—but are extremely hot and dense. One cubic centre metre of one is heavier than all the weight of all of the road vehicles in the United States combined. Neutron stars also spin crazily fast and the beams they blast out into the cosmos are pulsars.

In 1974, Hewish and a colleague, Martin Ryle, were awarded a Nobel prize in Physics for discovering Pulsars. It was controversial because Bell Burnell was left out and a number of well-known scientists voiced their protests. She understood the decision and didn’t let the situation affect her. Hewish and the others were the project’s leadership and Bell Burnell was only a graduate student at the time.

After completing her doctorate, Bell Burnell taught at some of the United Kingdom’s most respected universities. She continued research into radio astronomy too.

In 2018, Bell Burnell finally got recognition for her discovery. She was awarded a special Breakthrough Prize in fundamental physics that included $3 million in funding. She was flattered by the honour as she had no idea it was going to be awarded to her, and selflessly declared she would use the grant money to sponsor up-and-coming students.

Bell Burnell’s passion for physics and her desire to see further advancement sees her still  teaching at universities, researching radio astronomy and inspiring the next generation of scientists. 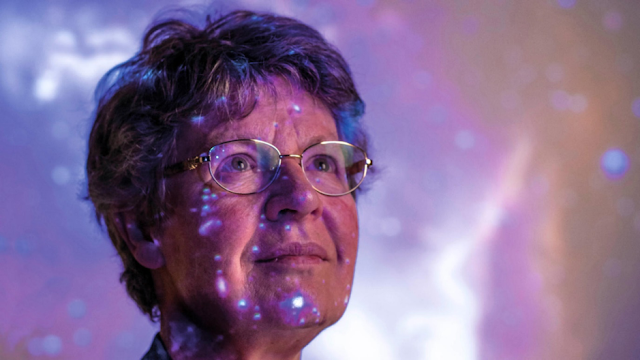 This image is a close up profile photo of Bell Burnell in her later years. https://www.dundee.ac.uk/stories/professor-dame-jocelyn-bell-burnell-shines-light-darkening-universe

How a NASA Spacecraft May Help Aliens Find Earth (https://www.nationalgeographic.com/news/2017/08/map-aliens-find-earth-voyager-40-pulsars-space-science/)

Meet the Woman Who Found the Most Useful Stars in the Universe (https://www.nationalgeographic.com/science/2018/09/news-jocelyn-bell-burnell-breakthrough-prize-pulsars-astronomy/)