Gender reveal parties are the latest celebration for expecting parents,  increasingly visible on all forms of social media.  If you type ‘gender reveal party’ into Youtube, you will be inundated with videos of expecting parents announcing the sex of their unborn child to the world. Parents-to-be announce the gender of their child, based on the sex of the child provided by a medical assessment by doctors between the 16th and 20th week of gestation. Similar to their well known analogue the baby shower, these events routinely employ stereotypical representations of gender to indicate the child’s sex. Typical symbols include pink, princess themes for girls and blue, cowboy decorations for boys. Gender reveal parties often employ dramatic techniques to reveal the unborn child’s sex, such as fireworks or the release of confetti or balloons. The once private moment for expecting parents has transformed into a public display, with these parties inextricably linked to social media. Critics state gender reveal parties ascribe gender to an unborn child based merely on their anatomy and place an unhealthy  focus  on gender norms and stereotypical representations of femininity and masculinity. Social rituals, such as gender reveal parties, emphasise the commodification of reproduction and the pressure on women to fulfill social expectations of motherhood.
The distinction between sex and gender has become confused with the ritual of gender reveal parties. Gender refers to social roles and personal identity, whereas sex is based on an individual’s biology and anatomy. Expecting parents are actually revealing the medically assigned sex of their unborn child, based on sexual characteristics assessed by medical professionals. In respect to both sex and gender, gender reveal parties enforce a binary of male or female and masculine or feminine. In this way, this social ritual excludes individuals who do not neatly fit into these categories, including 4% of births that result in intersex children. An exclusive focus on binary gender categories also prescribes gender roles to children on the basis of an assumed biological characteristics. Prescriptive gender roles and stereotyping has been linked to poor health outcomes in children, but the long term effects of gender reveal parties on pediatric health are still unknown. 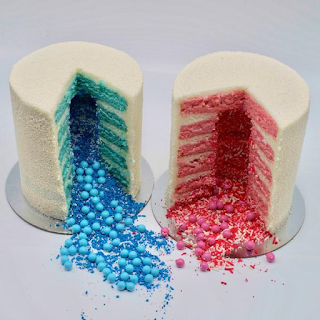 The commodification of identity and gender is nothing new, but gender reveal parties provide a new opportunity for the market to exploit consumers.  The combination of social media influence and the power of social ritual, places increasing pressure on expecting parents to conform and participate in the trend of gender reveal parties. Parents-to-be are increasingly searching for new and innovative ways to reveal their child’s sex to others, and this leads to dramatic and sometimes dangerous displays. In November 2018, the US Forestry commission released video of a gender reveal party that went too far. An explosion was used to indicate the child’s sex with blue smoke, but almost immediately the explosion blew sparks into grasslands, sparking wildfires in Arizona, USA (see: https://edition.cnn.com/videos/us/2018/11/27/arizona-gender-reveal-wildfire-orig-video.cnn). Closer to home, an Adelaide couple is facing backlash after their burnout gender reveal caused their car to light on fire (see: https://au.news.yahoo. com/burnout-gender-reveal-fail-car-goes-flames-110407938.html)
Gender reveal parties further entrench social norms around reproduction, and place value on women based on their reproductive status. Feminist literature has highlighted the historical tendency of women to be socially valued on the basis of their reproductive ability or status, and women are often exalted during pregnancy and motherhood. These social norms are intertwined with female gender roles that are associated with the home and motherhood, and historically restricted women’s status to caregivers. Despite the female revolution into the workplace, many women are still plagued by social expectations of reproduction and the provision of care. Gender reveal parties promote fertility and pregnancy, and reinforce these as rites of passage for women through social ritual. The use of social media reinforces gender reveal parties as a social norm by encouraging parents to participate, further entrenching gender roles socially.
The increasing popularity of gender reveal parties highlight the centrality of gender and its cultural role as the foundation for understanding individual identity. To feminists, however, gender reveal parties present many challenges and may leave many of us feeling uncomfortable. We may cringe at the pink and blue stereotypes and question the gender roles parents assign to their unborn child. They are however an important reminder of how far we have yet to progress, and how prescriptive gender norms and stereotypes influence children long before they are born. Pediatricians have raised concerns about the long term effects of gender stereotypes on children, yet gender reveal parties are encouraging parents to publicly gender their children as early as the 16th week of pregnancy. Many expecting parents are merely excited about the arrival of their child and may be looking for an interesting way to share this experience with family and friends. It is important to consider, though, the cultural ideas, norms and values we promote, particularly those we impose on our children.