A few months into joining my current company, I got pranked by my work friends with a USB stick that controlled my cursor, making me accidentally archive/delete emails, type words within words, and discard drafts. This prank had been making the rounds since before my time, and everyone had had a different reaction to it; some called IT immediately, while others smelt a rat and found the culprit. My choice of reaction was to spend two whole days updating mouse firmware, rebooting, reinstalling Outlook – basically to try to find what I believed was a genuine problem in my computer on my own – until I finally gave in and called IT. The colleague who pranked me (a friend of mine) christened it the Female Engineer Syndrome.

The Female Engineer Syndrome is, at times, a by-product of the Imposter Syndrome (self-doubt of abilities in one’s own field of expertise), and at other times it is a reaction to others showing doubt in your abilities. At all times it’s a form of defense.
Female Engineer Syndrome: A constant need to prove yourself to either yourself or others that you are a capable engineer, often leading to overcompensating by trying to do everything yourself in a bid to be aggressively independent.

I’m certain this applies to female professionals in many other fields of work as well, particularly in industries that are male-dominated. In situations where an “I don’t know” would be perfectly acceptable, women suffering from this syndrome will spend personal time to research the ins and outs to know so that they never have to be caught not knowing again.
This tendency is not to be confused by the general need to know everything. There are plenty of people who strive to learn new things in their industry and like to stay on top of things. This inclination stems from having faced bias for being part of a minority in an industry. It traces its roots back to being treated unfavorably by professors and classmates, not getting picked for class projects, being mansplained to at every opportunity, and being judged by one’s looks and physical attributes rather than talent. Coming out of a college education full of partialities, women typically either lose confidence in themselves and develop the Imposter Syndrome or become fiercely competitive and unwilling to be caught off-guard by peers (male or female). The consequence of both directions, however, is the same: a propensity to overcompensate. 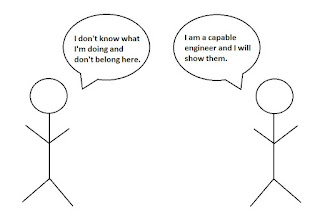 I suspect that there is a there is a broader category of women in such situations – women who defend their engineering skills to feel validated by the male population as a capable colleague. While it is hard to even talk about, many women have grown up being taught that male endorsement is a sign of success. It makes perfect sense if you think about the fact that most industry leaders are male. In fields that are male-dominated, one may want her father’s approval much more than her mother’s. The male scientists are celebrated, the male innovators are awarded –many aspiring girls grew before the days of Googling illustrious female physicists to have a more relatable figure to look up to. I spent years shopping for smart suits for professional settings rather than the skirts and dresses I was attracted to because I wanted to be taken seriously. The result is more than evident in the masculine, tough-looking female bosses who have been alone in male-dominated fields since the 80s.

The easiest way to slowly get rid of this is to have better female representation in male-dominated fields, and to expose our girls to the same world full of opportunities that we give to boys. As an Indian, I’m so proud to see such a massive number of girls from my country contributing to the rising number of women in STEM around the world. I wish nothing more than to see more of that everywhere.

There is nothing wrong with trying to be the best at what you do. But speaking from experience, it’s a lot of pressure that maybe I don’t always need to feel. Being the only girl in my class and most work teams hasn’t been a smooth ride. I find it naturally easier to befriend men a lot easier than women, most often because of my interests and hobbies, but because of that, everything was always a scramble for me to be considered a part of the competition by my peers. While I enjoy the ability to push myself to do better, I now realize that I often forget to calm down and accept my shortcomings, and everybody has those.

So, to all the women who are either pushing their limits or feeling short, my personal advice is to treat yourself as you would like others to treat you – equally. Accept your inadequacies, embrace your flaws and introspect on your strengths. No one human being can be everything – it is not expected of men, so do not expect it of yourself or the women around you. Be comfortable in the niche you bring to your industry. But most importantly, be unapologetically proud of who you are and your contribution to society as a whole.