It is my firm belief that everyone on the planet needs someone or something to inspire them.

Inspiration can come from many places; from the loved ones in your life, to an important and just cause, to the beauty of the world, to its profound sadness. It manifests itself in art, music, devotion and hard work. It is what drives us, gives us purpose and provides us with a comforting sense of something greater than ourselves.

For the first 24 years of my life, my father was my inspiration. My father was a South African lawyer and anti-apartheid activist; he was an intellectual and a dreamer; he was a poet and a comedian; he was tender yet hard to reach; he was sensitive and quietly passionate; he was cynical and painfully hopeful.  He was my example, he was my guide.

I looked up to him like a flower does the sun, and when his light went out, so did mine.

I was living in Australia when my father suddenly died. At the time I had just had a breakthrough with the chronic illness I had been battling for the past 12 months - a diagnosis and some treatment.  I had moved to be with my partner in Sydney and had barely settled into my new orthotics and medication when I received the news. Suddenly all the progress I had made vanished; the illness aggressively took advantage of me in my grief-weakened state, and spread from its anchor point in my back and neck, into my legs, hands and feet.  I fell into a thick swamp of depression, and as the sun rose each day and I awoke to the all-over body aches, stiffness and pounding pain.  I all but lost the will to live.

Everyone needs something to live for, and nowhere is inspiration more needed than in the lives of people suffering chronic illness.  Without my dad, I felt lost, afraid and hopeless.  I was struggling against a body wracked with sickness, and a mind torn apart by unbearable loss.  Yet even in the depths of my sorrow, I began searching for new meaning in my life.

It’s sometimes hard to define how inspiration comes about.  For me, it came in several forms and from different sources.  My father’s anti-apartheid activism was of course inspiring to me.  However, I had also been touched by an experience I’d had at University, one that had planted seeds in me that later germinated in my grief.

To this day, I am grateful to my friend Maddy, who encouraged me to come to a talk by Jackson Katz which she had organised at our Uni.  Maddy was a feminist, and had often invited me to come to her women’s group’s events and gatherings.  I was supportive of the cause, but too distracted by pain to pay it any attention.  However, when I researched Katz and found him featured in a thought-provoking documentary (Generation M: Misogyny in Media and Culture) I became intrigued.  Needless to say, Katz gave an immensely powerful talk that day, one that would go onto change my life.

Years later, in the depths of my shredded mind, I recalled  that talk and how much it had inspired me want to do something about the inequality in the world. One day in 2011, in our small apartment in Carramar, I pulled myself out of bed, sat at the computer and began to research the topics Katz had covered in his talk, and which I had seen illuminated in that documentary.  I have always been a driven person who, when she sets her mind to something, is really quite unstoppable.  I had thought that chronic illness would prevent me from doing much of anything in my life, so crippling was the pain, but the more I explored feminism, the more motivated I became to act. I could feel the energy rising in me, electrifying my limbs and shaking my mind loose from the grip of despair.  I became acutely aware of my own oppression, as well as the oppression of others, and felt, as my father must have all those years ago, the powerful desire to affect change in the world.

I went from reading books and watching documentaries about feminism, to starting a Meetup group for it online in 2012.  I purchased licenses to publicly and freely screen documentaries around the city of Sydney, trying to get the word out in the hopes it would inspire other people to action.  I started to network with other groups, attended my very first rallies and marches and fell blindly into the giddying world of left-wing activism.  Through all the pain, fatigue, nausea, anxiety and grief, I found and channelled a veritable quasar of energy into the cause.

This came at a cost to my physical health.  I greatly overdid it, and wore myself out to near breaking point.  But by the end of that frantic period of activity, I had built a non-profit organisation, one that reached out to, supported and inspired thousands of other women and men.  By 2016, The Sydney Feminists was a fully incorporated educational organisation, going into schools universities and even penitentiaries to teach people about gender, sexism and ways they themselves could work towards a better world.

Today, I have learned to better manage my chronic illness.  I practice self-care, pacing, maintain a good diet, exercise and sleep routine and regularly see my doctor and specialists for support.  I still wake up with intense pain each morning, and battle a slew of symptoms on a daily basis, but because I have purpose, I can get through it.  Feminism has become the new beacon of light in my life, one that guides me and motivates me.  The incredible people I’ve met, along with the intensely rewarding work that I do, gives me more than enough reason to push through all the pain.  I want to be here.  I want to help.

I realize now that it was through activism that I was able to connect with my father again. I could walk in his footsteps, but in my own way, and on my own path.  Activism, and feminism in particular, gave my life meaning at a time I needed it most. And while I am no longer fuelled by grief, I am still inspired daily by the women I work with and the incredible causes they champion.  I no longer look to one individual for inspiration, but to many, and I am both grateful and honoured to be a part of this movement.

Feminism saved my life, and I am ever thankful to the women and men who introduced me to it. My message to all people, especially those suffering from chronic pain or illness, is to find something that truly, deeply inspires you, and dedicate your energy to it.  It may take trial and error, and it may take time, but when you find something that really inspires you, all the precious energy you put into it you will get back in dividends.

That is the magic of inspiration.  It draws out your potential, and allows you to fully blossom in your newfound sun. 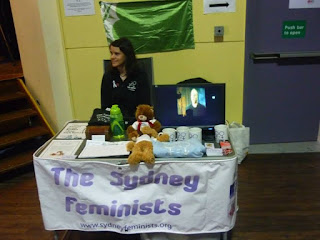 By: Tessa Barratt, Founder of The Sydney Feminists