What is Feminism? Eliminating Incorrect Notions Of Feminism

What is feminism? How has it become one of the most trending topics of all time? Do people have a complete knowledge of it? Questions like these always raise topics to discuss. Men these days are blaming feminism for the ‘unequal’ treatment of males. According to many men, women are not using their rights in a ‘correct’ manner. They claim that women are taking all these rights for granted. They are building this notion that women are misusing their rights and trying to degrade men.
Ideas like these are often created by the people who want to establish a false image of Feminism. They see each ‘Feminist‘ as someone who wants to lower the position of men in order to uplift women’s status in the society. However, it’s indicative of their lack of knowledge that they see Feminists as ruthless rebels who want to conquer the world!
So, it’s necessary for each man as well as each woman to have a complete knowledge of what feminism actually is. Let’s read further to gain more knowledge!

What Is Feminism?
Feminism is a social, economic, political and cultural movement which focuses on creating the equal status of women in society. It aims to give women the right to live a life of equality. It expands its coverage on educational as well as professional employment opportunities. Feminists around the globe raise awareness of women’s rights, and encourage women to use these rights to their full potential. Various institutions are working to help women succeed in their lives; all this under the banner of Feminism.

Women, for years, have been put in the category of a vulnerable and weak class which can be easily exploited. It was not just restricted to a certain place or a country; it was all over the world. Women were expected to lead their lives according to the leading male figure. In some countries, women didn’t have basic rights such as property ownership, voting or to even study.
What could be worse than not being able to live your life in the way you want? Women were seen as ‘objects,’ who owe their breath to their male representative. The selling of young girls, the killing of girl children or the custom of dowry, whichever way it was, women were exploited in each and every sphere of life. They didn’t have the permission to raise their voice and express themselves freely. Highly oppressed by the society, women were treated as a mere lifeless dolls.
Thus, this movement was the need of the hour, to fight against gender inequality.
Emergence of Feminism

The term came into the popular imagination when it was used in the movie ‘Woman of the year,’ in the year 1942, where Katherine Hepburn spoke about the “feminist movement.” This introduced Feminism, in a small way, into the light of popular culture. But it was slow to gain popularity at that time. The emergence of Feminism is divided into Three Parts which are known as:

The Three Waves of Feminism. 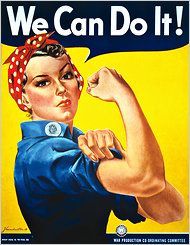 Feminism is a worldwide phenomenon today. It is gaining more popularity because of the digital age. Social media is proving to be one of the most powerful tools for women to express their views. A Feminist is not necessarily required to be a woman; men can be feminists too. Anyone who wants the equal status of women and no gender discrimination becomes a feminist.

Feminists have had success in many countries. The situation of women is far better than what it used to be. All this is happening because women stood up for their empowerment. The problem remains that women still get judgments on their looks, clothes and even on the work they do. No matter how intelligent a woman is or how successful she is, society still demands her to excel in household chores to get the label of ‘ideal’ women. Though these things have a psychological impact on women, they are striving hard to become women of substance.

What’s more disturbing is that when women are struggling to get their basic rights in society, men are claiming that women are being selfish! What men need to understand is that Feminism does not demand their degradation; instead Feminists wants an equal world. Feminism is a movement which aims to dismantle the stereotypes and roles assigned to gender. Why can’t a man take care of the house the way a woman does? Why can’t women run a whole business empire the way men do? Society has drawn upon these imagined differences across the ages.

Since birth, girls and boys get taught different lessons on how they should be. Girls in society are instructed to be polite, gentle, mature and beautiful. But boys can lead a carefree, rough, tough life. Feminism wants all these notions to take a backseat and seeks to build a world where there are equal opportunities for all! Feminism has come a long way but it still has a long way to go. Till then - be a strong Feminist!

By Divyanka. Reposted with permission from WomenLite.com

About the author: Divyanka Sehdev runs a women's lifestyle website which is focused on
empowering women and improving their lifestyle.