Book Review: The Periodic Table of Feminism by Marisa Bate

Caitlin Moran has said we’re "post wave" and Julie Bindel once said "there’s enough waves in the sea, we don’t need them in feminism," but it wouldn’t be feminism if everyone was happy.


Bate has put this in the breakdown of how the book is laid out. I wanted to point this out first, because I love it. This idea is lost these days. Feminism isn’t a garden party; we don’t have to be agreeable. It’s society that tells us we are homogenous, it’s society that tells us we can’t argue. But feminism is a political movement, made up of (mostly) women with differing views. I see feminism as a tree: we sit on different branches, looking back at the trunk in slightly different ways, we all have our own perspective, and we’re all trying to figure out how best to make it grow stronger.

Feminism is a ...political endeavour to make women’s lives better.

That mission is the only constant - the method, the expression, the arrangement and the organization is multiple, often conflicting, always hopeful, never perfect.

To Bate, feminism can best be expressed with a periodic table, to show all parts, all women, connected. All of us linked, influencing each other, throughout time. I see that too. She has a different perspective, and I enjoyed reading her view.

I like to think that if you’re sitting in a room of feminists and you all have the same view, you’ve done something wrong. If you all sit on the same branch, you can’t see the trunk from any other POV. You’ve got a blind spot. The tree will get lopsided and fall over. Maybe I just like to argue. I’m cantankerous. I don’t think any feminist theory is without merit, or bad, or should be cancelled or buried. I encourage debate. You don’t have to make a blood oath to any type of feminism.

I like Bate’s idea but maybe I’m just not familiar enough with the periodic table to make it click in my head at first glance. To me, it reads like the ocean: I read her entries in waves. But I get it. There is a link in the way pro-sex work feminists have been influenced through time, there’s a shoot off from the roots of radical feminism, there’s a connection where eco feminism as a movement took off, there’s the introduction of queer theory and how it has influenced the growth of liberal feminism.

The Periodic Table of Feminism reads like a who’s who of feminism: who did this, who influenced this moment, this movement, that shero. What motivated this, that, the other. This is not a bad thing, and I really recommend it!  I wish we had been taught this in high school, using Bate’s book as the course guide. We women deserve to know our history too. But we won’t be taught this, and The Periodic Table of Feminism can be used to help fill those gaps. I found entries of women I didn’t know about. This is a perfect starter for those new to feminism, anyone who is vague on the history of the movement or anyone unfamiliar with other countries' feminist sheroes. It’s good to know where we came from. This is a great collection for feminists of all stripes, no matter which branch you start on or are currently favouring. 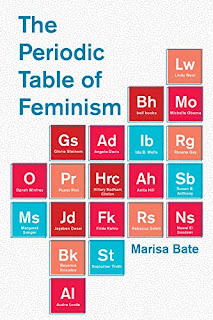 Bate introduces the waves, and then has a few paragraphs about her favourite or most notable sheroes, her elements (the elements that make up her view), from each of those waves. So we start with women like Mary Wollstonecraft, Emily Wilding Davison, Josephine Butler etc with notes about how they contributed to the cause.

If you read each entry, you can see the context start to appear (e.g. Bate does not go into great deal about the difference between suffragists and suffragettes in the intro for the first wave, but within Emmeline Pankhurst’s entry, Bate succinctly describes how they turned to "deeds not words"). Bate also makes time to have asides for side categories like fictional feminists (hello Lisa Simpson), political leaders etc.

The book also has some absolutely beautiful illustrations of some the feminists Bate describes.

I liked the explanation of the waves, especially of the contested fourth wave, which Bate pins down easily enough as an online movement. Identity-based feminism is most popular these days, which makes sense enough in a world that is moving more and more online. But when identity-based analysis is faced with a class politics analysis, there can be friction. Ideas and methods of analysis will clash. Sometimes liberal and radical feminists explode upon contact with one another, much like, to use Bate’s theme, Fluorine and Sodium*, but we all have a place on the table and at the table.

History has a tendency to overlook women’s stories. We have to pass them on to one another. This is the way we’ve always done it. Our movement for agency and personhood will always be inconsequential to our society when compared to something like the world wars (hopefully that’s changed since I went to school, but I doubt it).

Bate’s offering is a great way to plug holes in all of our collective knowledge. You don’t have to agree with everyone on Bate’s list, but it’s good to acknowledge them, to be aware of their contribution to the growth of feminism, and to understand how they helped advance women’s rights.

I really enjoyed this, and would especially recommend this to anyone that’s fresh to feminism or wanting to find some sheroes they might be missing out on.


*thank you RL science friends, for that reference.