13 years ago, as I prepared for college, my father (a mechanical engineer himself) warned me that mechanical engineering won’t be easy, that I would be working out in the field and getting tan, not the most desirable look for a good Asian woman, and I pish-poshed – silently, as would a good Asian woman – because that is precisely where I wanted to see myself in a few years’ time. What he meant is that I would be overlooked, second-guessed, objectified, undermined, spoken over, spoken about like I’m not right there, maybe even underpaid, and explicitly told at some point in my career that I was surely a “diversity hire.”

Being in a field of work that is infamously rampant with toxic masculinity isn’t the only reason he was right. Women struggle on a daily basis to be considered as qualified as men in every field. The gender pay gap is a commonly quoted example of this. Based on the Workplace Gender Equality Agency under the Australian government, statistics from gender pay gap data collected as of August 2018 show that the national full-time gender pay gap is around 14.6%. This means women, on average, earn about $245 per week less than men. The graph below represents the fluctuation of the national pay gap over the last 20 years. 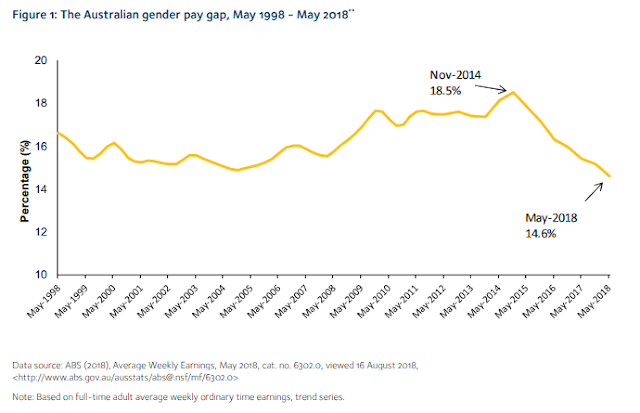 The agency goes on to show pay gaps by industry over the last year. Financial services, health care, STEM fields and arts show the highest pay gaps, ranging from 20 to 30% gap in pay. At the managerial level, women earn close to $90,000 less than men. The idea is that the higher the amount of technical qualifications asked of the employee, the higher the pay gap tends to be. In other words, women are trusted even less with work that demands expertise in each industry. So at this point, we aren’t talking about female representation lacking due to various societal pressures or predispositions. We’re talking about mistreating existing, qualified professionals. We’re explicitly talking about sexism.

In light of the #MeToo movement, companies have become more diligent about dealing with situations such as sexual harassment, which is good news for women in the workplace, although there is still a long way to go with that. Additionally, governments are becoming more conscious and diligent about trying to close the pay gap, which explains why gender pay gap in the public sector has steadily decreased and is, therefore, significantly higher in the private sector. Laws against sexual discrimination have improved over the years, and now include protection against discrimination during pregnancy and breastfeeding. Progress has definitely been made.

But overt sexism is easy to spot. It may be easy to find and stand up against unequal pay or sexual harassment, but most women will tell you that it’s the microaggressions that go unchecked. The one woman in a team of men will be the official card writer for birthdays, or the one organizing team lunches. The female designer will be given supportive projects while her male peers get the major assignments. An engineer is told to ‘smile’ while she is working. These are all personal anecdotes from my career or from those of female professionals around me. Recently, a supervisor emailed my male colleague about getting this one job on the factory floor done for me. While these examples sound reasonably benign, this behaviour is a major indication of women not being taken seriously in their careers. While this is a massive issue that roots all the way back to upbringing and cues from society, the question is, what do we do about it right now?

I believe that the foremost reason that elusive sexism at the workplace is allowed to go on is due to the fact that many women are desensitized to microaggressions and consider it a battle worth dropping in favor of bigger ones. The first step of solving a problem is identifying that there is one – and making those who don’t see it aware of it. One of the amazing things about the #MeToo movement was that so many men were completely blindsided by what constitutes ‘abuse’, and how common it was for women. So for those who haven’t faced it, it would be difficult for them to understand subtle sexism in the workplace unless we point it out as unprofessional behavior. Speak up at work; talk to your manager. Stop starting to share your opinion with an apology. Confront the aggressor directly. Take on and escalate people and situations that challenge your professional abilities. Ask for better projects. Say no if needed. Treat yourself as you would like your colleagues to treat you.

Lastly, but most importantly, educate yourself on laws that protect you from sexual prejudice at work. The Sex Discrimination Act 1984 protects you from discrimination in various scenarios. Read more about it at https://www.humanrights.gov.au/employers/good-practice-good-business-factsheets/sex-discrimination.