November 20, 2018
The common rhetoric blasted across our societal landscape is “The future is female”, but what if the past already was?

When you think about the art world, across a myriad of artistic movements, the main majority of modern artists were men. Whether it’s Duchamp, Matisse, Picasso, Dali, Warhol or Da Vinci himself, it’s clear that the mainstream rhetoric alludes to the masters of the art world’s past being predominantly male. Yes, there are the few outliers such as Frida Kahlo, Marina Abramovic who have managed to make a name for themselves over time but they tend to be the exceptions.

For every master of the art world, there is more than likely a female equivalent working within the same time period who is creating equally as innovative work yet has managed to go practically unnoticed as time has gone on. One classic example includes the previously neglected works of the Swedish artist known as Hilma af Klint. Klint was an abstract painter who was creating paintings within this visual style long before Wassily Kandinsky came into prominence in the 40’s. With her works now finally getting recognition, as seen with the recent exhibition in the Guggenheim, it is clear to see that the tide is finally beginning to change.

So, to further celebrate the works of powerful women artists, we at The Sydney Feminists have decided to shift the focus onto some of Australia’s finest female artists. Inspired by Zing Tsjeng’s ‘Forgotten Women: The Artists’ (2018), we’ve developed a thorough and comprehensive guide honouring some of the great Australian female figures who helped shape the art world. By placing a feminist lens on this revisionary approach, we’re doing our bit to help give these underappreciated visual artists the accolades that they deserve.

The first Australian artist featured on this list is the Emily Kame Kngwarreye, a major figurehead within the Australian art world. Despite having no strong knowledge of the art world prior to her brief, but brilliant, eight-year art career, Kngwarreye’s unrivalled artistic skill allowed her to thrive until her death at the age of 86. Best known for her works including “Alhalker” (1992), ‘Awelye’ (1994) and ‘Emu Woman’ (1988-1989), Kngwarreye was celebrated for meticulous touch, distinctive brushwork and striking compositions. By creating over 3,000 works within her artistic career, Kngwarreye established herself as an accomplished artist who positively impacted the art community within her hometown, Utopia. At present, Kngwarreye’s artwork titled ‘Earth’s Creation’ (1994) has been reported to have been purchased for $2.1 million AUD. Her legacy continues to inspire artists both in Utopia and beyond.

Dahl Collings is an exceptional artist, heavily influenced by the Bauhaus movement, whose impact on the Australian landscape must be celebrated. Known for a variety of artistic talents including graphic design, painter, photographer, filmmaker and commercial artist, this multidisciplinary artist has impacted the Australian landscape by blasting through the Australian visual trends of the 1930’s through the establishment of The Design Centre in 1938. Working with her husband, Geoffrey, Collings, she sought to introduce then modern art and design principles, such as Bauhaus, to the Australian Design industry. [2]


When looking at paintings such as ‘Textile Design’ (1950-1953), it is clear to see Bauhaus elements were sound influences throughout her works.

Collings ability to work on both personal and corporate projects harmoniously has paved the way for artists to be true to themselves while also supporting themselves financially with their craft. With works ranging from abstract paintings such as this piece [4] to award-winning films such as ‘The Dreaming’ (1964)[5], Collings proved herself a prominent multi-disciplinary artist who visually shaped the Australian landscape through education and artistic creation.

Davida Allen, a painter best known for her Archibald Prize win in 1986, is praised for her expressionistic brushwork that celebrates the emotions that come with motherhood. Allen’s influence stems from her ability to depict the range of emotions and experiences that come with family life. With textured, vibrant and heavily emotive paintings, Allen illustrates emotions ranging from tension to joy to turmoil throughout her impressive body of work. This mother, teacher and artist is best known for her painting titled ‘Dr John Arthur McKelvie Shera’ (1986)[6]. 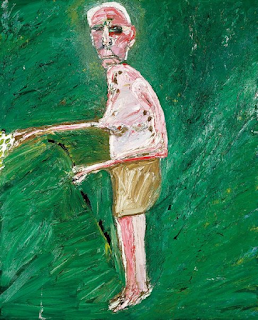 With a painting career spanning over four decades, Allen has had the time to refine her expressionist style as she continues to create works addressing her role within her life with her family. As Allen transitions from mother to grandmother, she finds her new works such as ‘Hoping the donkey will take the carrots’ (2017) centering on the “love and excitement and the small things that children do."[7]  Allen’s example has shown that it is possible for Australian females to have a lucrative art career well into motherhood and beyond and for that, she should be celebrated.

While these are some exceptional examples of influential Australian female artists, it is important to ensure that awareness within the Australian landscape goes beyond online articles. As it stands, in Australia 40% of artists represented in commercial galleries are female despite the fact that 75% of art degrees are obtained by women. When this is coupled with the recent findings that women earn approximately 81c to the $1 of male artists, it is clear to see that more needs to be done to validate the place of these talented female visionaries. [8]

By supporting organisations such as The National Museum of Women in the Arts (https://nmwa.org) or the Art + Feminism Movement (artandfeminism.org), you can help do your bit to improve female representation within the art world. To have direct impacts on your local art scene you can show your support for exhibitions and non-profit art spaces striving for gender parity or, if you’re an artist, try and start an artist-run initiative and strive for change by organising your own event. Improve accessibility to the art world by doing your part to fight for equal representation among genders now.