In 2009, I developed a tendency towards migraines. Since then, I have lived in four different countries with entirely different laws on medicine. Some drugs that are banned in one country aren’t in another and vice versa. For over ten years, I’ve searched for an effective replacement for my original migraine medication. During this time, a whisper of a question turned into a deafening demand: why is it so difficult to treat an ailment as common, yet incapacitating, as a migraine?

The fact is, migraines affect one in five women. This statistic is disproportionate to the number of men who suffer from migraines (one in fifteen). Migraine research is rarely sex-specific, even though hormone levels affect migraine tendencies and can differ based on sex. The stigma around migraines - ridicule, doubt and disbelief by friends, family and colleagues – might be different if 20% of the male population suffered from these debilitating attacks. Yet migraines remain one of the most underfunded areas of research in the world, despite being one of the most disabling ailments. But this article isn’t about migraines.

Why do we need women in STEM fields?

Women need to be represented and taken into consideration when developing scientific or technological innovations. As is, women are rarely included in target markets or as test subjects. Take, for example, engineering design. For decades, seatbelts have been designed for stereotypical male bodies, thus putting women at significantly higher risk of injury in car accidents.

Additionally, power tool designs also favour men, making them less comfortable for women to use. Women tend to feel colder in office environments because office temperature ergonomics have been established around the average 70 kg male body. And train railings are built at a height more comfortable to the average male than female. Most of the time, women are simply not included in scientific and technological developments. 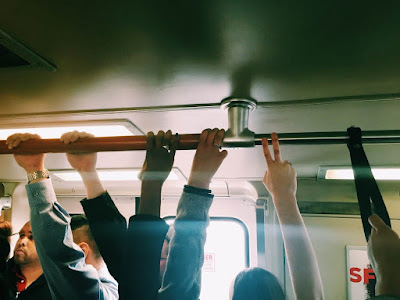 Image Description: A photo of a crowded train showing the arms and upper bodies of six people of different skin tones holding onto the upper handrail. You can see the person on the far left’s face, but the rest of them are hidden by their arms. This person is looking up towards the top left of the photo frame with a neutral expression. People are in various styles of dress, from business to casual. The person on the far right is significantly shorter than the others and only has two fingers placed on the rail (as opposed to the other people, whose hands are wrapped firmly around the rail).

The story isn’t too different in medicine. Many women metabolize drugs differently than men. The changes in some women's bodies from puberty to menopause significantly impact their physical and mental health. They also put these women at risk for depression and other mental health issues. Yet, female test subjects are still minorities in most medical research.

I also recently discovered women are twice as likely to develop Alzheimer’s disease than men. Still, current research glazes over the biological differences that impact the disease. And it is no secret women’s pain has been, and continues to be, dismissed as hysteria. When my surgeon cut into my jaw bones to drill my wisdom teeth and the anaesthesia didn’t work, he “reassured” my wailing, howling younger self that all I was really feeling was a numb vibration. Unsurprisingly, I now have acute odontophobia.

Some governments seem to have taken note of such sexism in the STEM fields. In the US, for example, varying policies over state and federal levels promote the inclusion of women and minorities for non-gender-specific studies. Researchers are required to provide a “clear rationale” for excluding women in a study. Further, clinical trials must be designed to include a valid analysis of whether women or racial and ethnic groups respond differently than other subjects in the tests.

But governments cannot always secure the representation we need. I argue the lack of inclusion in STEM fields is the main reason we need women representation. While it is the responsibility of researchers and designers to be inclusive, the truth is, proper inclusion isn’t happening. We need women to be involved in every step of every process in science and technology, from ideation to research and development to peer review to larger-scale decisions. 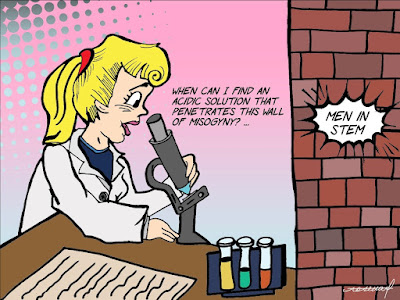 Image Description: A comic panel by Rose Kuan. The left-hand side of the panel shows a medical researcher sitting behind a table against a light pink to light blue gradient. They are looking into a microscope. They have long, blonde hair tied up in a red ponytail holder and appear to be wearing bright pink lipstick. They are also wearing a white lab coat and a navy-blue undershirt. In the front of the panel, on the same table as the microscope, is a paper with illegible writing and three test tubes filled with yellow, green and orange liquid respectively. Above the microscope, the artist has written the words “When can I find an acidic solution that penetrates this wall of misogyny? …” On the far-right side of the panel is a brick wall with the words “men in STEM” written in black on a white word bubble.

It’s not just about diversity and acceptance of women in what have typically been regarded as male-dominated fields. It’s also about equality in safety, ergonomics, access to proper healthcare, and accessible technology. This kind of equality would ensure our lives matter as much as men’s. Making sure we are well-represented in the groups making such decisions is one step towards such equality.

And while we work towards equality, let us remember women have increasingly larger buying power. Industries would significantly benefit from tapping into this market with women-inclusive research (or anything more than making half their products pink, flowery and more expensive). A few industries and companies have shown initiative in this department. Athletic wear and sports equipment companies spend a great deal of time and effort creating designs specifically for women.

Companies such as Green Heron have teamed up with various research groups to make general agricultural tools more ergonomically feasible for women. Prosthetic products have seen a significant increase in women-centric design. The more women we have at the table, the more voices can ensure others we matter. With a more proactive approach towards inclusive research and a growing number of women in STEM, it is hopefully only a matter of time until women’s lives are considered equally valuable to those of men.

Editor’s Note: Sexism in the STEM fields does not only affect women. Trans men and nonbinary people also suffer from a lack of representation in STEM. Unfortunately, in a lot of scientific research, “outlier” identities (including trans people and nonbinary people) are either discarded or lumped into the categories of “male” or “female,” depending on one’s assigned gender at birth. This article focuses on women in the STEM fields, but more research and inclusion of various gender identities needs to be addressed moving forward.