Navigating Performative Allyship Within Spaces of Genuine Solidarity: What Does it Mean to be an Ally?


In the wake of the horror that was the Christchurch mosque shooting, Brunei’s anti-LGBT laws and the current political atmosphere, solidarity and community must become our anchor. It can act as the compass that guides us through this tumultuous period of anger and sorrow. As the old but never aged feminist saying goes, ‘the personal is the political’. This quote holds particularly true for those of us who exist within the margins of identities that do not align with white cis-heteronormativity. But for those whose reality is a privileged one and who don’t necessarily have to think about how skin colour, gender and sexuality impact job opportunities, healthcare, the right to exist, etc., this article is for you. Particularly, for those of you who want to support the equality and rights of marginal groups and identities, or who have already declared themselves allies to these groups, but don’t seem to understand how this works in concrete terms. Because it takes more than hashtag activism or apologizing on behalf of your colonizer white ancestors to be a genuine ally and source of support. We need more than your ‘declared wokeness’. In this sense, there is an evident disconnect between wanting to make the world a better place and taking the necessary and, most importantly, active steps to making that happen. This disconnect is where ‘performative allyship’ often lies. 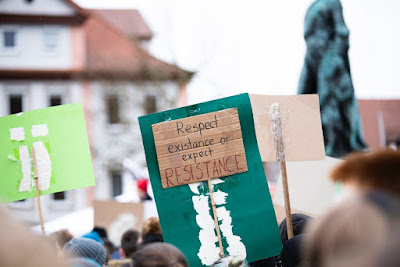 Image Description: Photo of a protest from the point of view of a person in the crowd. The shot shows only the tops of the protester's heads and they are all out of focus. The main focus of the photo is three handmade signs. The one on the far left is bright green and facing away from the camera. The one on the right is a pinkish tan and also facing away from the camera. The one in the center is a forest green with a cardboard rectangle glued to it. In black letters, the sign reads "Respect existence or expect." Beneath the black letters, in upper case, red letters is the word "resistance." In the background, out of focus, you can make out two white townhouses with orange roofs, a tree without any leaves and a green statue of what appears to be a mother with two children.

At its fundamental core, being an ally is a positive thing. It means you are aware of oppressive structures that don’t necessarily affect you and utilize your privilege and elevated platform to support marginalized identities and groups. The problem arises when you show your ‘allyship’ through unconstructive support and take the attention away from the groups for which you are supposedly advocating. It is easy to rant online about queerness and gender fluidity. It is another thing entirely to confront a homophobic friend or relative about their opinions, regardless on how ineffective confrontation might be towards people whose opinions likely won’t change. The reality is, a privileged ally can ultimately pick and choose the battles they want to fight. But being a queer person means embodying the battle, always having to justify your existence whether you want to or not. The least any privileged person can do when faced with these situations is attempt to educate and show solidarity to the communities you seek to empower. 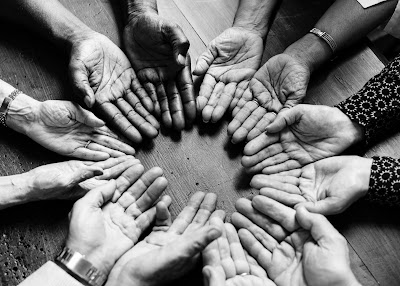 Image Description: A black and white photo of twelve hands forming a circle against a backdrop of wooden boards. The photo is taken from above and the hands are held palm up. All of the hands are very different - there are different skin tones, ages and genders represented.

Performative allyship can often be blatant, like with declarations of ‘not seeing colour’ when discussing debates and issues on race. However, it can also be complex and hard to navigate. The lines between what is ‘performative’ and what is genuine are often misconstrued and easily confused. An example of this complexity can be seen in New Zealand prime minister Jacinda Arden’s choice to don the hijab in solidarity after the violence directed towards the Muslim community. Many other non-Muslim (and primarily white) women followed suite. Although many women applauded this show of strength and support for the Muslim community, other criticized showcasing solidarity through the donning of the hijab. The hijab is deeply, religiously important to Muslim women, and non-Muslim women can take it off and go back to their regular lives without the fear of being a target of violence. While the intent might have been genuine, the impact could possibly overshadow the voices of communities that need to be amplified and heard. Being an ally means allowing these voices to have a platform, even if that renders you to the back stage. 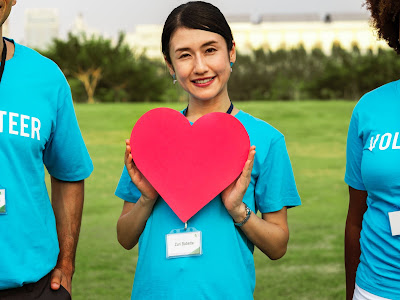 Image Desription: A photo of three people standing in a field. The person on the left and right are cut off. You can only see one side of their torsos and a bit of their necks/ hair. All three people are wearing turquoise t-shirts with the word "Volunteer" written in white, block letters across the chest. They are also wearing black lanyards with name tags attached (though you can't make out the names). The person in the middle is holding up a red heart with both hands. They are looking directly at the camera and smiling with teeth. They have straight, dark brown hair that is pulled up into a bun. They are also wearing earrings, bright red lipstick and a bracelet.

So, how can we better ourselves as allies? One major change you can make is to actively listen to discussions and discourse that may or may not make you uncomfortable. Another is to not interject in these discussions or get defensive. It is not a matter of blame, but rather an important moment to realize how those who are not protected or privileged live. Allies exists to help highlight the voices that have not been given a place in most mainstream discussions. Another important focus would be to educate oneself about various topics, so marginalized groups don’t have to do it for you. Then be vocal in your solidarity and make sure you are creating a safe space for people of marginal and oppressed identities. Donating to organizations that support these groups and advocating through peaceful protests and legal engagement with political representatives is also a great way to protect and empower these groups. Being an ally means SHOWING these groups you care and want to make a difference, not TELLING them. And trust me, we know the difference.