Up until I was ten years old, when my mother choreographed for and taught dance to the kids of the local Indian community, I looked up to one of her students. She was in her later teens and was the star of every show because she was the best dancer in the group. I knew she was studying to be a civil engineer, and she refused to listen to her mother’s advice to take better care of her skin every time she went out into the field for work, making her intrepid in my eyes.

After we moved away, my mother unsuccessfully searched for a contact number or an email address to get back in touch with her family for decades. Twenty-two years later (just last month) my mother was finally able to track her down and speak to her. I was happy to hear that she asked about my career and wanted to know if I was still working in mechanical engineering. When my mother said yes, she said, “Good.”

Women frequently dropping out of STEM fields is a very commonly acknowledged, and almost accepted, phenomenon. Researchers have conducted numerous studies on the statistics of women in STEM and the inability of STEM fields to retain their diversity numbers. The historical lack of women in these fields in the first place has made it less imperative for companies to accommodate women-specific needs. It is difficult, if not impossible, for many women to balance a career in STEM with raising a family or other personal life goals.

Of course, there is also no dearth of data that proves women are paid less than men. This gap only increases dramatically with career growth, giving women at higher points in their career less incentive to stay in the same line as their male peers. These are all statistical, measurable ways of understanding why women often drop out of STEM careers a few years down the line. But, from my personal experience as a mechanical engineering student and professional, the one major, rather unquantifiable, reason for women leaving STEM fields is – surprise, surprise – bro culture. 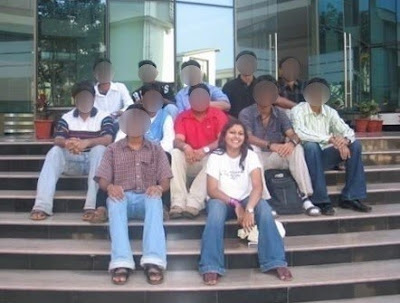 1: My class of mechanical engineering in the first two years of university.

Image Description: Photo of author with her mechanical engineering class. The group consists of Shreyasi and eleven men. They are sitting on grey stairs in front of reflective glass doors. There are two rows of four and a row of two in front. Shreyasi is on the right in the front. She is wearing flair-legged blue jeans and a white t-shirt with small, black writing on the front. She is also wearing pink bracelets and a watch. Her forearms are rested on her thighs and her hands hang in between her open legs. Her hair is dark and hangs past her shoulders. She is smiling with teeth and looking at the camera. The other people in the photo are wearing mostly jeans, though two of them are wearing khakis. It is impossible to see what the men in the back row are wearing as pants. Most of the men have on collared shirts, though some are long sleeved and others are short sleeved. They range in color from bright red to maroon plaid, to light green striped to plain black. Their faces are blurred for privacy reasons.

Firstly, it is hard enough having little to no girls in your classes. A study done at Ohio State University in the United States revealed women tend to drop out of classes at an early stage in their university education, especially during a PhD, if they don’t have any female company in their classes. Women subjected to mostly male classes in doctoral programs are apparently 7% less likely to graduate within six years than their male colleagues. This gap goes away when there are more women than average in the same classes. The ones who do drop out do it mostly in the first year.

The above study examines two logical, measurable reasons why the women who stuck around in their courses underperformed when compared to their male peers: research funding and grades. As it turns out, neither reason shows any statistical relation to the number of doctoral candidates graduating within six years. The gap is accounted to an unmeasurable “climate” that isn’t exactly favorable for women’s educational needs. This “climate”, or the absence of other women supporters and mentors, is basically what I call competitive bro culture.

While I was growing up, my father never encouraged spending too much time on looks and aesthetics, because I was told I was not the type of girl to waste my time on such trivialities. While I didn’t mind that approach, which was unique for its time, it roughly translates to “I’m not to be treated like other girls”. For the first few years of my life, I refused to wear a skirt or a dress to work or interviews. This decision had nothing to do with my father; it had everything to do with wanting to be treated like an equal professional rather than the lady who gets the coffee. The only girl in an engineering group has to assimilate by being “one of the boys” and cannot be thought of as attractive. It’s so easy to internalize the broxicity (bro toxicity)! 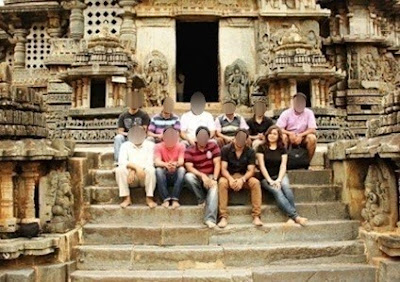 2: My team at an earlier workplace.

Image Description: Photo of author with her work team. The group consists of Shreyasi and ten men. They are seated on stone steps in front of what appears to be an ancient temple. There is a row of six in the back and five in the front. Shreyasi is seated in the front on the far right. She is wearing faded blue jeans and a black t-shirt. Her hair is dark, wavy and hangs just past her shoulders. She is seated with her legs together, angled to the right. Her ankles are crossed and both of her hands are resting on her right knee. She is looking at the camera and smiling slightly without teeth. Her male colleagues are dressed in a range of outfits, including faded jeans and khakis. Some of them are wearing plain t-shirts and others are wearing short sleeve collared shirts. Their faces are blurred for privacy reasons.

I did eventually figure out how damaging that thought process was to myself and the women around me. One of the first times I wore a dress to work, a colleague told me I looked like an air-hostess. He quickly added he meant it as a compliment. This behavior is so confusing to a woman! The exchange basically implies the following things:

1. We are considered equal because we behave like the “bros”.
2. We are undesirable, but an air-hostess is.
3. At the same time, we are “above” the job of an air-hostess?

Not many women want to stick around for a work culture that breeds toxicity. Plus, can you imagine being asked to “man up” when it’s time for your pregnancy and maternity leave? Baby penalty is real. Professionals in fields such as academia, with its toxic “publish or perish” approach, don’t take well to a gap in publications or fieldwork. Similarly, remaining relevant in IT requires relentless updating of skills and certifications. And, while concessions are not to be made for anybody, refraining from introducing flexibility in a field is quite definitely part of the gentleman’s club mentality.

Looking at these two pictures years later, I am amazed just at the change in body language from when I was in university to when I started working and learnt to love and display my femininity. Even so, I am still more comfortable with my current male colleagues than my female ones. But with the increasing number of women at our company, we recently had a few “ladies’ lunches”, to which some of my friends protested men didn’t have anything of the sort here, so why did we need them?

Women like me have had very little real support or mentorship at work from other women. We need support groups. We need to learn to communicate with each other. We need space to practice being welcoming and benevolent to each other to encourage the influx of women in our fields in the future, to escape the broxicity and give newer female professionals the benefit of a more conducive working climate. These are women who will have already suffered casualties on their way here, as we did on our way here. We have an opportunity to give them something we wish we had been given – the confidence to be as much of woman as they’d like to be.