A few weeks ago, young women in Australia and around the globe discovered a new role model in sports superstar Tayla Harris, when a photograph of Harris appearing to defy gravity went viral. People were inspired by the fantastic photo, which captured the skill, dedication and physical fitness of an athlete in her prime. The photo and its reception said so much about the state of female athletes in today’s world. 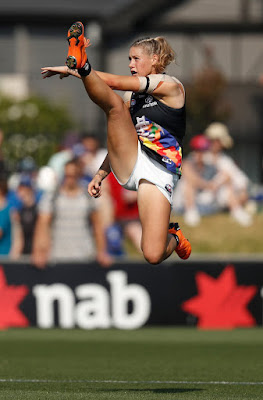 Image Description: Photo of Tayla Harris on a turf soccer/ football field. She is shown mid-jump, with her left leg bent behind her at a 90-degree angle and her right leg stretched almost straight up towards the sky (with a very slight bend at the knee). Her right arm is hanging down by her side and her left arm is stretched straight across her chest and behind her leg. She is wearing a black jersey with a multi-colored patch at the bottom (red, yellow, blue, green), a pair of white shorts and bright orange cleats. Her hair is blonde and pulled up in a high ponytail. She is looking to the left of the camera and her face is in profile. Behind Harris, you can see the edge of the soccer field, which is covered in a black banner with "nab" written in bold, white letters and two red stars to either side of it. The background is out of focus, but you can make out a crowd of people sitting in the stands, watching the game. Image taken from Harris' personal Twitter feed. https://twitter.com/taylaharriss/status/1107933757976117249

It demonstrated all the usual, garbage gripes about women’s sport (it’s boring, the physicality isn’t on the same level as men’s sport, the athletes are of a lower calibre). It also said a lot about the misogyny that continues to exist in Australia. Within hours of Channel Seven’s AFL sports page posting the photo, it attracted repulsive and vitriolic comments. These comments were so hateful, Harris later issued a statement describing them as sexual abuse.

The magnitude of Harris’ statement should not be underestimated. For the mere act of existing as a woman in a public forum, Tayla Harris was subjected to horrific abuse that went completely unmoderated. Making the situation worse, Seven’s response to the comments punished Harris rather than the perpetrators, by simply removing the photograph entirely.
A moment intended to celebrate Harris’ athleticism and skill was deemed too controversial for Seven’s Facebook page because of the behaviour of misogynists online.

Seven’s response to the comments can hardly be classified as anything less than a victory for the abusers against the abused. Seven later re-uploaded the picture, along with an apology for the way they handled the situation. But the whole, ugly incident brought to light a dark undercurrent of our society, in which blatant misogyny flourishes unchecked, while women live with the consequences.

Harris herself was quick to seize on the importance of this moment, saying, “I can see in people’s photos they’ve got kids, or they’ve got daughters or women in their photos even, and that is the stuff I’m worried about ... This is the start of domestic violence, maybe this is the start of abuse.” Her statement reminds us these trolls don’t exist in a vacuum. They are out in the world every day, interacting with women and perhaps raising a generation of them.

While the incident no doubt horrified many people, the reality of the Tayla Harris debacle certainly only surprised men. If you’re a woman and have spent any time whatsoever on the Internet, there is no question you've encountered trolls of this stripe before. They are particularly popular on social media sites such as Facebook and Twitter, and in the comments section of mainstream media websites.

If there is one bright spot in Harris’ situation, it’s shone a light on the very real abuse women face online each and every day. It could possibly begin to shift the onus of behavioural change from the women being targeted back to the men who abuse them. Like so many societal problems which disproportionately affect women, sexual harassment and gendered abuse have typically been explained away as actions of a small group of lonely, bitter outcasts. But Harris’ case shows this understanding of harassment is far from the truth.

Such harassment and abuse are perpetrated by men who interact with women on a regular basis. They marry them and raise them and work with them. They aren’t outcasts at all, because we haven’t made them ones. In fact, these men are so comfortable expressing their views, they do so without the anonymity offered by websites like Reddit and 8chan. They do so with their own names, photos, and often places of work proudly and publicly displayed. That’s how confident these men are in their ability to escape repercussion. They expect, perhaps rightly, they will face no real-world consequences for their virtual abuse.

Again, such behaviour does not exist in a vacuum. It’s allowed to go on because countless individuals allow these men to make rude comments without doing anything to stop them. It's a different version of “boys will be boys” that no one has yet bothered to take meaningful action to address. The Prime Minister and heads of the AFL and Channel Seven can condemn such behaviour in words all they like. But until they take concrete action to punish these men, by banning them from matches, or at the very least suspending their Facebook accounts, they’re merely sweeping the problem back under the rug. 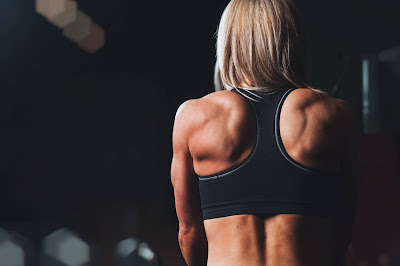 As a woman active in online feminist spheres, who is vocal about my beliefs, I do have to pause to consider the ramifications of this scandal for myself and other women. So many of us have been subjected to hideous misogynistic abuse online. Often, like Harris, those making the comments display their full names and photos of their children alongside their vitriol. It is horrifying to realize the men who espouse these views are all around us. They're next to us on the bus, talking to us at bars, perhaps working alongside us at our jobs. And, as Harris’ case has shown, with the thinnest veneer of anonymity, they’re not afraid of making their disdain for women known.